Build season began with Kickoff on January 5, 2019, and Team 1403 has already made significant progress in brainstorming ideas and creating prototypes. Our goal this year is to keep the schedule tighter and more efficient than ever before, which we have so far been doing well with. Team 1403 is ready and enthusiastic about the build season ahead.

The Robot Manager, Niva S., is proud of the significant progress the team has been making. They have actual prototypes driving and they are now going to finalize the prototype that they will use. Plans were made to give the drawing to Mechanical, and although that hasn’t happened yet, the Mechanical team is working on other important things and overall, the team is using their time well and being productive. 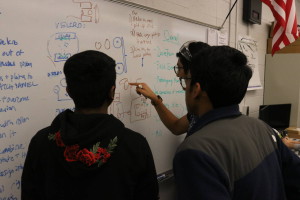 The Mechanical sub-team has been prototyping several new ideas. They have been able to narrow the initial ideas down to one that incorporates several ideas from several prototypes. The sub-team has also been creating the physical robotics field, which will improve the ability to prototype effectively. The team expects to go above and beyond what they think they can do, and as long as they keep a positive attitude, they believe they will be in great shape this year.

The Design sub-team has begun planning the geometry of this year’s robot by working with the Mechanical and Electrical sub-teams to create prototypes and test them. They have tested several aspects, such as the drive train and lifting mechanisms. They have created CAD models of all of these, which are then needed to be approved by team captains and mentors. The team hopes to finish the entire robot by this weekend, and there isn’t much standing in the way of them accomplishing this goal.

Besides working on the prototypes, the Electrical sub-team started planning the electrical board, which is the control system for the electrical components of the robot. The board also 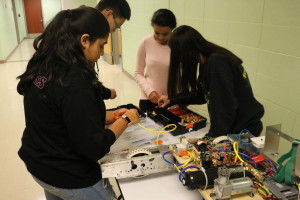 provides power to the robot, a crucial necessity. The electrical board is one of the most important parts for the robot’s operation, so it must be completed so drivers can have time to practice to be best prepared for this year’s game. The team has been working hard to be prepared for the upcoming season.

Programming has been testing prototypes as well, and they have also been updating last year’s code. This year’s competition introduced a new aspect, which is the Sandstorm, a period of time at the beginning of each competition where the team does not see their robot. They could either make autonomous code or attach a camera to their robot, which requires the team to create new code. Programming is a crucial role in this years game, and our programs must work very hard to ensure success this season.

Pranav Saboo, the logistics manager, began working on the Chairman’s Awards submissions, including finalizing the team, essay, and presentations. He and the rest of the logistics sub-team have also been working on resources for The Compass Alliance. The Logistics side this year wants to keep Team 1403 running as smoothly as possible, a job that is just as important as designing and building the robot itself.

The Business & Communications sub-team has been working on several team event sheets, such as those for Kickoff and the strategy meeting. They and the A/V sub-team are working on Chairman’s themes and ideas for the essay as well as the video. They also wrote a team event sheet on The Compass Alliance’s recent partnership with FIRST. They are continually updating the website and our progress as a 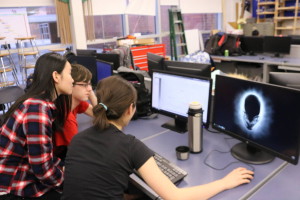 team. This includes uploading team event sheets, as well as new team information, such as The Compass Alliance’s partnership with FIRST.

Outreach has been managing and hosting events. For example, the Invention Convention event is an event in which students in our community create science projects, and present them to fellow students in order to practice their skills in science. They are also starting to send emails for the Women in STEM event, an event hosted by Team 1403 where women working in fields related to technology explain to people the importance of female involvement. Outreach is always looking for new volunteer opportunities for our members.

The A/V sub-team began outlining the Chairman’s Awards video, where they are working on themes, as well as general approaches. During build season, they also plan on continuing to take pictures and videos, recording our progress. Each day of build season, at least one team member from A/V stays during the meeting to photograph the robot as well as our team, and what we’ve been doing.

On Sunday, the Strategy sub-team hosted a meeting, where they created and presented a presentation going over the rules of the game that had been revealed during Kickoff. During the week they 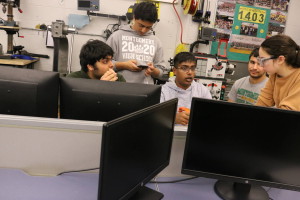 discussed possible approaches to this year’s competition. They suggested a number of ideas, which robot side later created prototypes of. The Strategy sub-team also began looking for alliances during competition. They began researching our team’s competition history and finding strengths that would be compatible with our team.
Cougar Robotics has made excellent progress in the first week of the build season. Each sub-team has clear goals to accomplish in the coming week. We are eager to see what is to come in the future!