We have now reached the end of week two of Build Season, and Team 1403 has already been making significant progress. Both the Robot and Logistics side have been working hard to ensure that everything runs smoothly in the coming weeks. 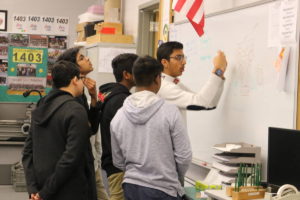 This week, the Robot side has been continuing their work on the prototypes, using a number of available resources to refit an old robot arm with new electrical components. They have attached a manipulator to the arm and have started testing using game elements, which have been built to scale with wood. The Robot manager, Niva S., says that the team has been making great progress and they hope to keep it up.

The Mechanical subteam has been working on the gearbox and prototypes for this year’s competition,. Additionally, they have been working on improving the drive train with the programming subteam. This week, they also decided on a final prototype; out of three prototypes proposed, they chose a compromise of two of them.They have continued to improve these prototypes and mount them on the chassis bot for the driver to start testing. In addition to this, mechanical has been preparing for the invention convention, an opportunity for members of the community to present their ideas.

The Electrical team has been working on renovating the 2007 robot and updating its electrical components to fit the current drive station. 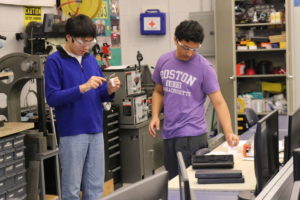 The purpose of them doing this is to allow the drive team to begin practicing. They have also been renovating the kit bot with new neo motors and spark max motor controllers. Electrical has also been working with design to implement PID, which helps improve the accuracy of the robot’s motion.

Programming has been testing prototypes, and working on the Teleop code and vision programs for the robot. Programming captain Mihir S. has been creating the code for the programs on the chassis bot, and the vision team has split up into two groups. One group is working on getting info from the camera, and the other group is taking info from the camera and making it so the robot can drive smoothly towards the vision targets.

The Design team has been planning the intake to be able to manipulate both cargo and hatch panels. This week, they worked hard to figure out the most efficient way to put the intake on the lifting mechanism. 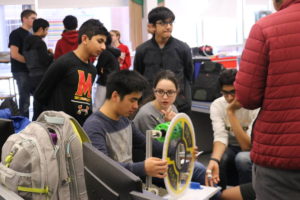 Design has worked out that the arm should be powered by built-in gearbox reductions from neo motors, with chains that will undergo two more reductions. Overall, their goal is to make the mechanical design process as smooth as possible.

Logistics has created an outline with the Business/Communication team for the essay, which has been reviewed and needs to be revised. A/V is starting the storyboard for the chairman’s presentation, which will be based on the essay. The Logistics manager, Pranav S., plans to speak to Strategy about their data collection form this Saturday.

Business/Communications has been working on writing the Woodie Flowers and Donald Bowers essays, as well as the weekly parent newsletters. They have also been working with A/V on the Chairman’s presentation, and have been planning for the eventual submission of the Chairman’s essay. They have also been making sure that the website is up to date and as well designed as possible.

Outreach has been continuing their work from last week, by figuring out and planning the details of the invention convention next week. This is one of the volunteer opportunities for the team, and is one of the community events to encourage children’s interest in STEM. Outreach has also been planning the Women in STEM event, and they have set up the Skybox volunteering event this year to teach children about Lego Mindstorms.

The A/V team has been staying after every day to take pictures and videos to document the progress of the robot. They have taken the team photo this Saturday, and plan to make a storyboard for the chairman’s video. A/V has been working with Business/Communications and the rest of the logistics team to make sure all of the Chairman’s submission work is properly planned and executed.

Strategy has been brainstorming what is needed from alliance teammates and decided what the necessary data collection for each team should be. As usual, they are working on creating and improving match strategy and this week, have been working specifically on planning for different scenarios that could occur at competition.

The end of week two of build season brings the recognition that each member must continue to work hard and prepare for our eventual competitions. 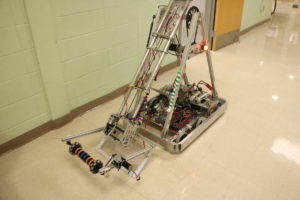 Although we may still be in the beginning stages of this year’s build season, it is necessary to keep up the level of professionalism and work ethic that Team 1403 has always prided itself on.