Instead of opening with a formal presentation, this cougar class began with a discussion about what we had accomplished and how we could improve as a team. After the discussion, the team was split into seven different teams, and together, had to complete seven different activities. 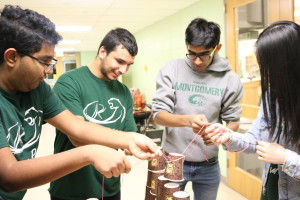 Teams were given the task of stacking cups together using large rubber bands. They were split into two groups and each group was given a rubber band. Together, the team had to try and build the tallest tower, without touching it. Teams learned to work efficiently together.

At this station, teams were given a tape measure and had to roll a ball down it without it falling off. The teams were allowed to choose however long they wanted to keep the tape measure and many teams decided to keep it at the greatest length but soon realized that they should start small and build their way up in order to get better results. It tested the team members’ knowledge on the team and FIRST through trivia questions. The goal was to teach members not to speak over each other and listen because different people would have different answers. This had the added effect of educating the members on their team.

Teams were given folded paper and were told to build a tower with it with the maximum height possible and every time a team member would say “measure”, the tower would be measured, even if it has fallen. The goal was to change the way the group communicated with each other.

Another station used a virtual reality game, where one person wore a Virtual Reality headset and saw a series of puzzles. The other team members were given sheets with answers to those puzzles. The group members needed to communicate with whoever wore the headset to describe what they were seeing to solve the puzzle. 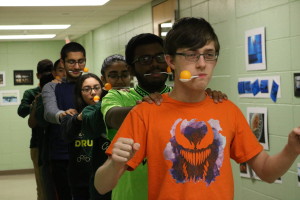 In this challenge. each member would have to walk across a beam with a spoon in their mouth. A ping pong ball was placed on the spoon, which had to remain on it for the duration of the activity. Teams had to work efficiently and quickly as the activity was being timed.

The challenge began with team members on one mat, and the goal was to get the entire team across the hallway using only six mats. If a mat was left idle, it was taken away from the total of six. The team members had to develop a strategy in order to use every member’s strengths and weaknesses so that they can ensure that their entire team crossed.

It tested the team members’ knowledge on the team and FIRST through trivia questions. The goal was to teach members not to speak over each other and listen, because different people would have different answers. This had the added effect of educating the members on their team.

All of these stations were designed to build skills such as teamwork and cooperation.  Altogether, each group was able to learn how to better communicate with each other and  understand each person’s strengths.