At the beginning of the second Cougar Class, the Engineering and Design process was further elaborated on. The presentation centered around the simplest of 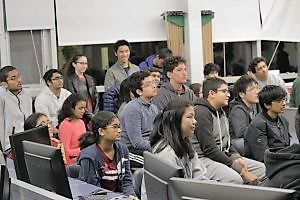 human inventions: the wheel. The lecturer, Michael Leicht, went over the various kinds of drive trains that previous robots had, from the most commonly used ones, such as tank treads, to more obscure and specialized kinds such as independent wheels and a four-wheel drive. Every alternative had pros, cons, and a cost, which can make decisions difficult.

The attendees, after being split into teams, had a very simple task: build a tall structure out of spaghetti, hot glue, and some tape. Complexity was added one layer at a time; just as real builders often build parts of a house at a workshop and then transport the parts to be assembled on-site, the newly formed teams had to do the same, 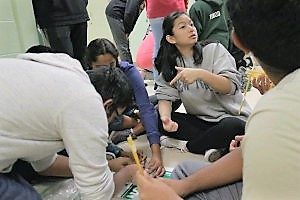 moving pieces of their entire building onto a foundation made of marshmallows. They had to submit their plans to the mentor for approval, then place the marshmallows on a canvas and mark the space they had to occupy. If any of the marshmallows were moved from this original arrangement, the building would be void. In addition to all this, each building had to bear the load of a golf tee with a golf ball on top, making the task much more difficult.

Every team was able to make a free-standing structure, but disaster struck when they tried to move them onto the 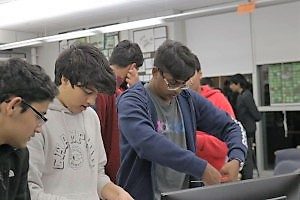 marshmallow base and place the golf ball. Small imbalances were multiplied as the buildings were pushed down into the marshmallows and ended up falling over and breaking apart. The team that one had a very thin structure, but were able to hold the ball due to an effective design with triangles.

This Cougar Class allowed the members of the robotics team to be able to work with others more efficiently, and it gave them more opportunities to freely share their ideas. The problem seemed impossible at first, but as people created and tested potential solutions the panic died down and the goals became much clear.