The first Cougar Class of the year began with a presentation by Mr. Leicht on the most important knowledge that one needs to build a solution to any problem: the Engineering Design Process. The presentation hinged around a few common themes that would be vital to the team’s success. One of them was looking for the simplest solution to a problem. The example that he gave us was of a robot that had to pick up something. It is only necessary for a robot to use few actions in order to perform this task, it does not need to perform many different actions to do so. When designing anything, one should think about what would get them the most accurate result, using the least amount of materials. Other concepts that were taught to the group were defending one’s own ideas and aiming to fail as quickly as possible in order to not fail in the future. 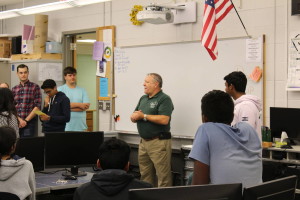 After the presentation, the attendees were separated into ten teams. Each team had to build a rocket out of construction paper, hot glue, and cardstock. This rocket would be launched across the adjacent hallway with a launcher that would let out a burst of pressurized air. After a few test runs, the teams would have to predict the distance at which the rocket would land after the next run, by placing a bucket at the expected location. 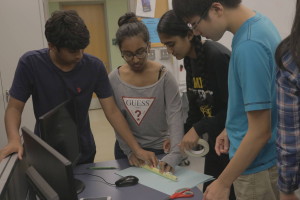 The team whose rocket went the longest distance with the most accuracy would win. Throughout the process, our team learned about what it meant to understand the given problem and what would we the most important thing to observe. While the rockets were being launched for testing, no one noticed that the launching station was slightly tilted, which was throwing off the direction of the rocket.

The students in attendance also learned to set goals and fix their ideas by moving the bucket according to how their rocket moved in the previous launch. Team ten, the winning team, weighted their rocket by filling it with hot glue so that it was more stable and predictable.