Following the success and productivity of Week One, the sub teams on Logistics and Robot side continue to make progress throughout Week Two. Like Week One, many hours of hard work and dedication were put in by members of the team. As mentor Mr. Bernardis concluded, “Overall, the mentors were impressed by the great effort the team had put as well as the progress made.”

The Robot Manager, Aamhish R, intends for the team to finish the CAD for the drive train, as well as the prototypes of floor intakes to be finalized. He has high hopes for the continued progress of the team, and looks forward to the final two-thirds of build season. 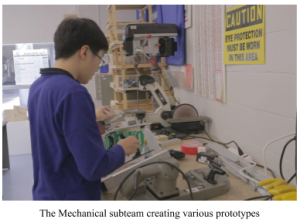 This week, the Mechanical sub team decided on what prototype they will create. Today, they plan to think of more ideas and will also continue working on assembly. They are also beginning to create several new prototypes for the drive system and the intake system. The purpose of the drive system is to physically move the robot, and the purpose of the intake system is to grab and move the energy cubes into their desired location. In order to create these numerous prototypes, they also have to create specific dimensions for materials, and cut them inside of the CNC.

Programming has made great progress this week and has accomplished much more than they had at this point last year. The Programming sub team is in the process of creating their echo code. The echo code is one of the most difficult aspects of programming, because it requires the team to create code that operates by itself, before the driver can operate the physical controls. This is a part that our team as a whole has struggled with for a long period of time. If the Programming sub team is able to create and perfect an autonomous for this year’s robot, we will be able to get more points during competition. In addition, The Programming sub team has also been working on PID, which stands for Promotional Integral Derivative. The way it works is by recording the speed of the motors inside the robot, and playing it back in auto. The purpose of this software is to allow the robot to move and turn at a constant speed, which is a crucial part of this competition. It allows the driver to control the vehicle with much more ease as well.

The Design sub team has recently been working productively to design several potential prototypes for the drive and intake systems. They send these over to the Mechanical team, who build them. They are currently designing the elevator part of the robot, which is very important for gripping and moving the energy cubes. The assembly drawings have also been finished for the drivetrain. 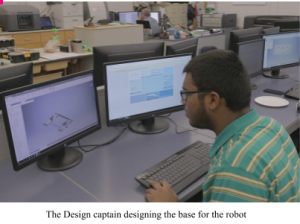 From a logistical standpoint our team is much more involved than it has been in past years, courtesy of logistics manager Nive B. This week, Chairman’s interviews for the Chairman’s presentations have begun, and Nive hopes to complete Chairman’s Essay and Chairman’s Video as soon as possible.

Strategy is at a crucial role in this year’s game, and our Strategy sub team is ready for it. They have finalized our codes for plays, and are working on turning them into posters to hold up at the matches. Now, they are memorizing our plays so that our sub team is extremely familiar with our plays and can be confident when calling them at matches. They hope to brainstorm ideas for scouting soon and pick out the qualities we want in allies. 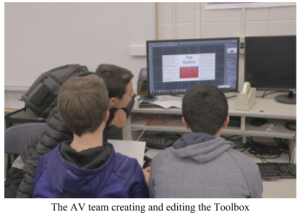 Mrs. Leicht has kept our team in check by completing our team’s t-shirt orders and registering the volunteers, who will attend the District Event.

Additionally, the other mentors and mechanical engineers Warren V. and Mr. Bernardis are creating molds for the wheels after the manufacturer ran out of his supply. Mr. Bernardis expressed his content by the progress, impressed about everything being CAD. Â During the Saturday meeting, he told the team to not lose sight of the end goal, with â…“ of the build season being done. He hopes to keep the momentum up as the competition is approaching.

Overall, Team 1403 hopes to sustain their achievements for the next following weeks, preparing for competition. Both the mentors and team captains are satisfied with the progress and have set goals for the remainder of the season. Furthermore, Team 1403 is preparing for the Montgomery District Event, and anyone interested is welcome to register–parents, students, alumni, and any community members.