Build season is halfway done after the conclusion of Week 3. Over the course of  this week, Team 1403 has made great progress on all aspects of the robot and logistics areas of the team. Members are excitedly awaiting the competitions and look forward to completing the robot.

This week, Robot Manager, Aamhish R, formed another set of goals, including finishing the robot by Wednesday of Week Four, completing the frame and intake by the end of Week Three, and finalizing elevator drawings, which are CADD models for the design which will be used for scoring in the Scale, or high goal. He is also pleased with the progress we have made so far, but expects that the team understands time is limited and progress on the robot must be made in order to be a serious competitor.

Mechanical continues to work on building the drivetrain. The final intake design and prototype are continuing as they go onto Week Four of Build Season. One of the Mechanical members, Vibhu I 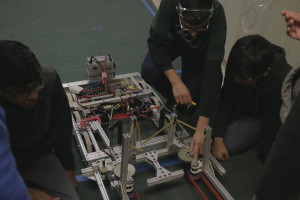 states, “Our biggest challenge at the moment is manipulating the cube into the correct orientation.”

Electrical has designed mounts for various electrical components, as they are waiting for Mechanical to complete the final drivetrain. They are designing a mount for motor controllers, which will be able to house twelve talons. These motor controllers create a constant speed for the robot to move at. They have also designed a mount for the radio and the switch, so that the components will take up less space and the robot will be more compact.

Design has been working on their intake design for the robot,  creating a number of prototypes so they can come up with the best design. The CNC Team creates G-code programs from the drawings, to machine the desired materials to create  the part needed to build the robot. Design has been working on their own team event sheet, which consists of the components that they work 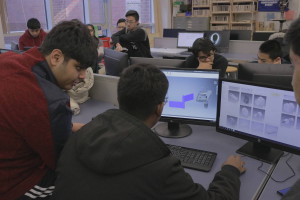 The Logistics side of Team 1403 has increased their efforts in all areas in order to deliver quality work. New mentor Miss Yip, mentor of the Montgomery Upper Middle School FIRST Lego League teams, is giving a new perspective  to the Logistics Team and their work.  Nive B, Logistics Manager, has set the goals for the week to continue working on the Chairman’s submission and video.

Business continues to compose the prestigious Chairman’s essay. The subteam has finished most of the essay and has now shifted to the editing stage. With the help of mentors and team captains, the business team is working to refine the essay to its best possible form. Business has also worked on the weekly parent newsletters, which is published on the website and sent to parents.

A/V is working on the Chairman’s video which consists of Team 1403’s outreach in the community, Cougar Classes and all yearly activities. They are working side by side with the Logistic sub teams collaborating the content for the video. A/V created the Tool Box guideline for members to use to learn about tools, knowing what they are and putting them back in the proper place. This serves a useful way of keeping items in order, and allowing members of Team 1403 to use them properly. A/V continues to photograph the progress of the build season activities.

Communications is working on pictures and newsletters for the build season. They continue to edit to the website, fix broken links and the trademark, add instructions to read HTML links, and upload all the Week One photos and newsletters. Communications continues to update social media for Cougar Robotics, including Facebook and Instagram pages.

Furthermore, Strategy devised a set of criteria that they will utilize to determine which teams would make good alliances during competitions. For pit scouting, they are editing a list of questions 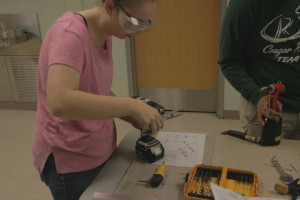 for other teams, in order to make the most informed decisions about who to ally with. Some alliance criteria include the mechanism their robot uses to climb and the number of cubes that their robot can manipulate over the course of a match.

The end of this week marks the halfway point of the build season, and Team 1403 has made great progress already. However, there’s still a lot that needs to be done, and it’s going to be exciting to see how it all turns out.