Once the Power Up competition theme was announced at Kickoff, Team 1403 began productively working on the robot—from coming up with robot design ideas to building mechanisms. On Sunday, the Strategy team presented the game rules in the manual to the members of Team 1403. At this meeting, members of the team noted important details to improve our team’s strategy. Overall, the Sunday meeting was a great way to begin the build season and have the team come together to brainstorm ideas for the new robot.

For the past week, the 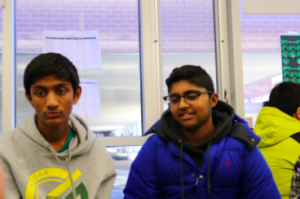 Robot Manager Aamhish R. states that for the past week, the Robot side of Team 1403 split into groups to find the most effect mechanism for manipulating the power cubes. On Wednesday, they converged into two groups working on separate mechanisms: one involving clamps and one involving a roller mechanism. Overall, they have been improving their ideas to ultimately determine between the clamps or the rollers. Aamhish plans to start building a drive train for the robot within the next week.

The Mechanical team has been thinking of the prototypes that would work best for the competition. They have been working on a claw that uses pistons to grab and hold the cubes and place them on the switch and scale. They will also be working on a wheeled prototype that uses a vacuum to hold onto the cubes. All in all, the mechanical team has thought up many different cube-manipulating methods

Programming has updated all of the RoboRIOs and CANTalons to the most recent firmware. They also taped down the switch and driver station areas to get an good idea of what the field will look like and test to see their improvements to the firmware. They have also put code in the kit bot and are starting to test the prototypes. Their goal is to finish testing the autonomous paths for the robot.

The Electrical subteam has been helping other subteams with their prototypes and making sure that they work. They have made a chassis kapok ready to test. Their future goals are to test with other teams and when there ready to build a robot that would work based on the specifications provided.

The Logistics side of the team deals with social media, communication, writing competitions, and Audio/Visual. For the business subteam, one of their main tasks is the creation and submission of the Chairman’s Essay which is then submitted for the Chairman’s Award, one of the most prestigious awards of FIRST. This 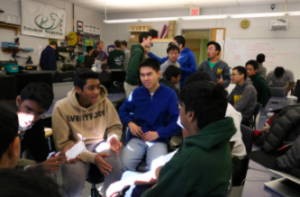 subteam writes a new essay every year, which consists of a theme about the productivity and actions of our team. The Business team also creates progress reports and other forms of documentation which are posted on Team 1403’s various websites and social media accounts.

The Outreach subteam has worked on revising the Outreach outline that will be used for the chairman’s essay. This subteam also works on planning and finding new events to instill into attendees a passion for STEM and a sense of community spirit. Currently, this subteam is planning an event in order to recruit more parent volunteers for the Montgomery District Event.

The AV subteam has been very productive lately, working in many distinct fields. One of their roles in Team 1403 is to create a guide to the toolbox. This guide allows for its users to know exactly where their desired tools are. It also allows them to know exactly where to return the item,  which maintains order. Another role they have is to create the Chairman’s video, which they are still brainstorming various ideas for. In the future they are planning to create this video for the chairman’s award. The AV subteam also takes pictures during every activity. These pictures are used by the communications subteam.

The Communications subteam has several roles, such as managing all of the team’s social media outlets and website. With the pictures received from AV, this subteam uploads them onto Twitter, Youtube, Instagram, and Facebook. The website serve several purposes such as informing our donors about our progress, and advertising our team to new companies and donors as well. Communications also distributes these images among the other Logistics subteams, which use them for progress reports. 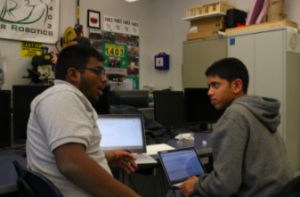 Lastly, the Strategy subteam is the one of the most prominent part of the logistics side. Based on the competition and rulebook, they work side by side with the Design subteam. Strategy and Design decide together how they will approach the robot competition as a whole. Based on point values, time consumption, and difficulty, they decide what approach regarding the competition they plan to take. As the strategy captain stated, “We have been working on a playbook for different game strategies. We are the brain of the game.” Then, the Design subteam creates the exact method for how they will accomplish their goals. Another important part of the Strategy subtream is to recommend who to make alliances with during competitions. If our team continues on to the next round after going past qualifications, we need to choose alliances with the other teams. Currently, they are deciding some ideal characteristics to have in their alliances. The Strategy subteam creates a detailed spreadsheet details the positives and negatives of other teams’ robots prior to competition. Based on a certain criteria formulated by this subteam, they decide the most ideal alliance for Team 1403.

Based on the evaluations made by the mentors and coaches, Team 1403 is making good progress and is well ahead of schedule. The mentors expect the students to keep up the quality of work they have displayed during this week and carry it on into the rest of the build season.