To begin the Cougar Class, Michael Leicht taught the team members about how to determine the plan for constructing a robot, or a structure. Based on a set of rules and guidelines given by instructors, he preached about how to pr 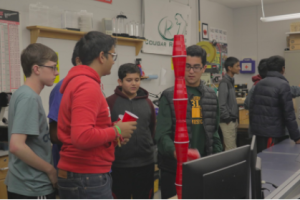 oduce the most effective result. He gave a clear example, which involved how many wheels a team would hypothetically put on their moving robot. Since the robot has a size limitation, there is a max amount of wheels that can be put on a robot. The debate was between four, six, or eight wheels. We then assigned number values to effects of having a particular number of wheels. Size, speed, turning, and stability were all factors that were affected by this. For example, the more wheels, the more speed. Conclusively, we determined that eight wheels was the most effective. This lesson’s objective was to teach how to find the best solution to an issue.

After, we were given a rather simple task, which was to make the highest free standing tower. We were given several materials of limited quantity, such as plastic cups, rubber bands, a paper bag, a poster paper, a hot glue gun, straws, and popsicle sticks. Although this would seem easy, we were also given a restriction, which was that when building our structure we could not physically put any pressure onto the cup. The group of 40 students were split up into ten groups. The teams had 30 minutes to design, test, and produce a strategy to move the cups. Students were allowed to add things to the cup using hot glue or rubber bands.  During the production, each team developed a uniq 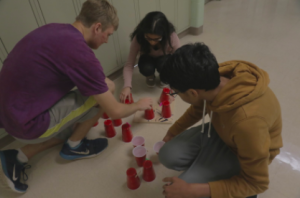 ue strategy. Some groups chose to use the popsicle sticks as chopsticks, whereas others chose to hot glue straws onto cups to make a rigid structure. One group used the rubber bands as handles while carrying the cups as well. After the 30 minutes passed, the groups were all sent outside to the hallways to build their structures. Overall, successful teams had to be able to cooperate and experiment wisely.