In the beginning of Cougar Class, Michael Leicht taught the team members about the Engineering Design Process, which are the steps to build a solution to a problem. Steps of the process include planning/prototyping, building, and testing several times. Essentially, it is a trial and error process that allows the team to build on and improve their design. Michael Leicht related his presentati 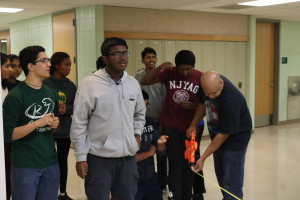 on to Team 1403’s past failures, and shared advice on how to improve this year’s robot. For instance, he advised against “being jack of all trades, master of none”, which was a problem with last year’s robot that was able to shoot and place gears yet was not a master at any of the skills.

After Leicht’s lecture, attendees were split up into groups and instructed to build a structure using a wooden board, popsicle sticks, rubber bands, plastic utensils, and a hot glue gun to launch a candy pumpkin as far as possible. Students were able to research ideas for the first five minutes, but then, all phones were put into Ziplock bags. As a group, the eager members planned and created a catapult to launch the pumpkin. They applied what they learned

from the Engineering Design Process Presentation to create the most effective launcher. Teams who were successful discussed and thought through what they were going to make prior to building. They also carefully observed the rules, such as not being able to hold down the catapult. After about 30 minutes, the students tested their structures three times. The distance the pumpkin traveled was recorded for each group. Trials ran on a rotation so that teams only had a few minutes to improve upon their catapult in between tests. During that time, they modified their robot to make it more effective. The lesson regarding the importance of the Engineering Design Process was clearly displayed. The retesting aspect of the process caused great improvements, with some groups achieving a second or third length 10 times their original.  The most effective designs used rubber bands to launch their pumpkin, with lower-ranking ones using bent spoons or popsicle sticks.

This exercise was meant to instill an understanding of the cyclical engineering design process. Through the students discussing their thoughts, testing, and improving, they practiced the Engineering Design Process and essential teamwork skills.