Mentor Michael Leicht began the first Cougar Class on October 11th, with an introduction to the Robotics team. He briefly went over the past achievements of the team, as a way to introduce the new members to Team 1403’s past history in FIRST Robotics. Member Teerthra Ayanji also discussed an outreach program that the team will be 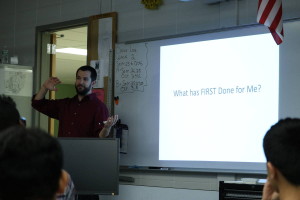 participating in: Rock Brook. Team 1403 is starting Rock Brook once again this year, and will be teaching the students the basics of programming by using NXT Mindstorms. Michael Leicht then gave a presentation on his past with FIRST Robotics and his current role as a mentor. Overall, this presentation allowed members to learn more about him as a mentor and imparted the following message: in order to learn something, you must put in the effort and work hard.

The mentors presented the challenge for this Cougar Class; teams of four needed to work together to build a bridge using popsicle sticks and glue guns. Teams were only given twenty minutes to effectively design and construct the bridge that would have to hold up a bucket filled with sand. During the challenge, certain obstacles were incorporated. For example, only the youngest member

of each team was allowed to speak for a duration of five minutes. Overall, many groups constructed truss bridges, incorporating triangles as a key element in the design, while other groups opted to develop simpler bridges. As a result of this fun yet challenging activity, the students learned team building skills and needed to incorporate them into the challenge to work effectively with the rest of their team members. Additionally, the students learned about a few concepts of STEAM (Science, Technology, Engineering, Art, & Mathematics) by understanding how to create a successful architectural structure in less than half an hour. Ultimately, the most successful group was able to incorporate the truss design and work effectively together in order to create an efficient bridge. 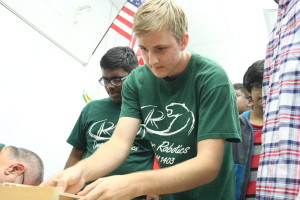 The class ended with an essential lesson on teamwork. Without being able to successfully work with a team, it is impossible to accomplish much. Through the activity, members had to learn to be a team member—not an individualist— and to respect their peers.