After many weeks of hard work and anticipation, the build season has finally come to an end after week 6. Members of Team 1403 are excited for the upcoming competitions and putting final touches on the robot. At the beginning of this Saturday’s meeting, all members were rando 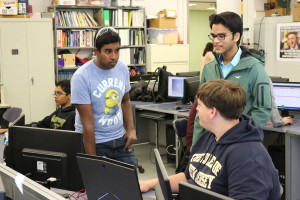 mly tested on our team’s executive summary. While reviewing this information was a nice way to start the day, the mentors stressed the importance of having to know this information about the team no matter what subteam they are on.

The Robot side of the team has been particularly putting in a lot of dedication this week. Overall, they finished making the robot and started testing it, along with making up some minor changes and putting in some final touches. Additionally, they are also working on the robot manual.

The Mechanical subteam has finished mounting the shooters and fixed some issues with it. They also completed more parts of the hopper system and redesigned the gear system. Recently they started working more on the intake and adding more such as the backplate. Of course, their priority for the next few days is finalizing the robot as soon as possible. The Mechanical subteam captain, Chris felt that “everything’s coming together very well.”

On the contrary, t 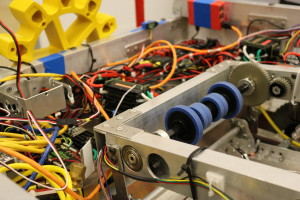 he Electrical subteam has been helping other subteams, mostly mechanical and programming in testing the shooter and other parts of the robot. Furthermore, they are organizing the electrical board and decided on the battery location of the robot, which is essential in order for the robot to function. They are currently deciding where to put the radio, the switch, and the circuit breaker.

The Programming subteam got the drive train running and they are continuing to work vigorously on vision tracking. In the past week, they also continued a system using feedback from cameras in order to more precisely angle our robot to capture a gear. This would be used when the robot moves autonomously and to aid the driver. Finally, they also wrote code which controls the driving system and the shooting system and worked more on the autonomous mode, particularly on the code generating the paths the robot would move on. 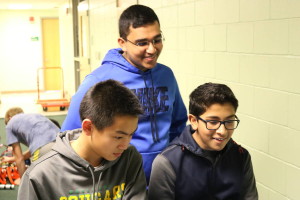 Members of the A/V team are working strenuously on finishing interviews and shooting for the chairman’s video and taking pictures. They are almost finished writing the script for Chairman’s video and making the storyboard. Strategy is sending out forms for when members want to sign up and they finished finalizing the excel sheets. They are also printing the buttons to give out for competitions.

Along with the build 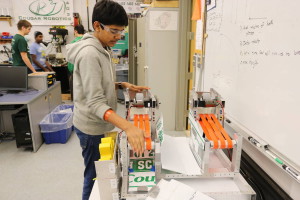 season, the food drive that had started two weeks ago also finished today.With build season reaching its end, the members are looking forward to competitions however there is still a lot of hard work and preparation ahead. As seen through everyone’s work efforts throughout the day, the team is without doubt ready for all challenges ahead of them.