IRST Team 1403 Cougar Robotics is pushing through the final stretch of build season. Cougar Robotics will hopefully have finalized their robot for this year’s game and the upcoming week will be devoted to testing, troubleshooting, and programming the robot. As for Week 5, the team is efficiently putting together the parts of the robot.

The Robot side has been focused on finishing the robot by the end of the Saturday meeting. They met into the night this Tuesday, Wednesday, and Friday, taking a break on Thursday from the snow. Robot Manager, Aman is hopeful that the team can have this robot up and running by Monday.

On the Mechanical Team, the parts have been made. They are currently working on assembling the parts so that the robot can be completed for Week 6. Mentor, Michael Leicht hopes that the programming team uses the last week of build season to troubleshoot the robot. The Mechanical Captain Chris is “excited to finish the robot by Monday” and “has a good feeling about this [robot]”.

On the Electrical Team, they have planned out the electrical board. Currently, they are mounting pieces onto the board, connecting motors and wires to make the robot work in sync with the power modules, Talon motor controllers, and power distribution panels. In addition to connecting the individual parts electrically, they have strategically placed all of the main components in order to effectively use the space. 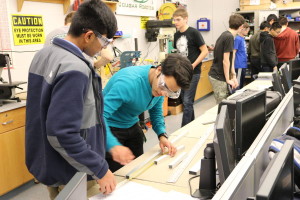 mplete the design of the hopper system. The members are reviewing the designs for the final robot. In the upcoming coming week, they are going to work on creating tutorials on how to create gear boxes for the Robot Manual. Andrew, the Design Captain aims to complete the robot design by Saturday.

The Programming Team has finished programming the autonomous portion of the robot and is ready to revise and test. They used a system of infrared sensors for this part. They will be helping the Mechanical Team build the robot to get it ready for testing as soon as possible.

On the logistics side of Team 1403, the Business Team has submitted both the Chairman’s Essay and Executive Summary. Business Team is also responsible for writing the Parent Newsletter, which is subsequently uploaded to the Cougar Robotics website and sent out to parents and sponsors.

The A/V team continues to record interviews for the Chairman’s Video. They have been interviewing mentors, such as Michael Leicht. A/V members are also taking pictures of the team to put on social media, parent newsletters, and the website. As for the Communications Team, they have been updating the website and making edits. Furthermore, they are helping the Business Team complete the Parent Newsletters for the past week.

The Strategy Team has bee 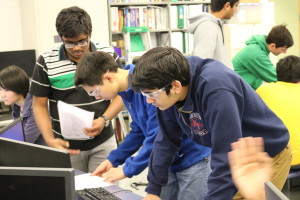 n working on the team’s strategy for the competition. They have created mock data to put into fields in order to practice analyzing the data. They are experimenting with converting the data gathered at competitions into Excel spreadsheets.