With only two weeks left in the build season, the Montgomery FIRST Team 1403 has been working diligently in preparation for competition.
After weeks of anticipation, the robot sub teams have finished prototyping the 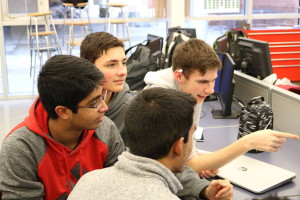 shooter, the intake, and the hopper. They have also begun to build the frame and put the robot together.

The Mechanical team has built the drivetrain, which is a system in a motor vehicle that connects the transmission to the drive axles. They have been working on prototyping for the past two weeks and finally finished it this week. They have also been making great use of the CNC machine, which is a process used in the manufacturing sector that involves the use of computers to control machine tools. 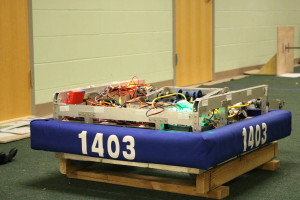 Meanwhile, the Programming team has finished motion mapping, which was started a couple weeks ago. They are now ready to program the robot for the autonomous part of the competition. The code for vision tracking was also finished this week. This allows the team to use a camera to line up the robot with the gear peg.

This week, the Design team also contributed a lot of effort to the building of the robot. They have drawn multiple designs for the robot. Currently, they are half way done with the robot design. They are also continuing to work on creating designs for specific parts of the robot and plan to finish by next week. 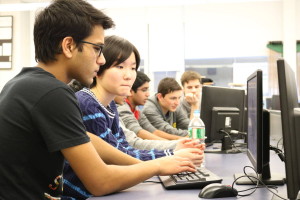 ten multiple drafts of the Chairman’s Essay and is working on making final revisions before the deadline on Thursday, February 9th. They plan to have the essay ready for early submission on Tuesday. Furthermore, the subteam has been answering the Chairman’s questions for the essay and working on Woodie Flowers.

Besides helping the Business team with their parent newsletters, the Communications team has successfully updated the team website and have managed to translate it into a multitude of languages, such as Chinese, Arabic, Spanish, Russian, and French. Additionally, they have updated all team photos and slideshows on the website.

The A/V team is currently focusing on the Chairman’s Video. They started filming and interviewing team members. Additionally, they finished creating the updated team photo boards. Ultimately, they plan to compile all the videos and pictures necessary by the next two weeks. 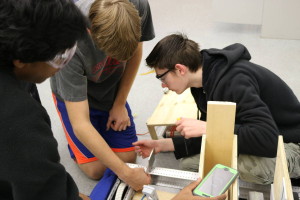 sentation to the members about filling out the forms on the tablets during competitions to ensure the most accurate information is recorded. They walked the members through the form,  explaining each category and the purpose of the forms. Afterward, they created a quiz for members to test them on their knowledge of the competition rules for review. They plan to start collaborating with the robot subteams of Team 1403 to work on strategy.

This week, Team 1403 started collecting food items and toiletries for the Montgomery Food Pantry to help out struggling families, organized by the Outreach Ambassadors. To promote the Food Drive, the robotics team is holding a competition between all the subteams to see which team can bring the most items. The subteam that brings the most items by the end of the Food Drive will win a prize! Team members have already brought many items to this Saturday meeting and everyone is encouraged to continue contributing more next week!

Overall, Team 1403 has made significant progress and continues to produce high-quality and consistent work. The mento 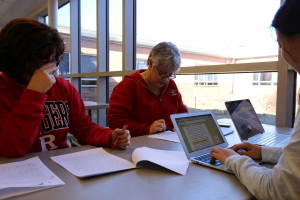 rs remind all members that they are ready for the home stretch and that they need to remain focused. While working on the goals of their own subteams, Mr. Leicht has also stressed the importance of working together. He also encourages individuals of the team to help out other sub-teams once they have finished doing their own jobs on their own sub-teams. In his own words, “finish your work the best you can, and then do 10% more!” This is definitely something the team will be keeping in mind as the competitions are approaching!