Officially having met the halfway mark of build season in Week 3, Team 140 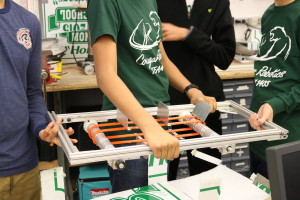 3 has been working vigorously to prepare for competition.

This past week, our team has started to turn the wood prototype into metal. The Mechanical Team has made lots of progress, working on the gear holder to keep the gear at the right angle. They also made a conveyer for the shooter, which further develops the accuracy of the shooter and makes shooting the balls easier. Additionally, they worked on the back board for the intake, prepared for the field element on the competition and finished building the steam boiler. In the future, the Mechanical Co-Captain, Koustubh, plans to test everything they have done on chassis and to start working with the metal elements they need.

rical Team has been busy putting an encoder on the shooter shaft and working on defining the electrical board. During this week, Electrical and Programming will be working closely to finish the robot sensors.

The subteams have been cooperatively working together to be as productive as possible. Each subteam helps other subteams to accomplish their necessary tasks. Soon, the Electrical Team will insert those sensors on the robot.

Simultaneously, the Programming Team has been working diligently on vision tracking. By using a camera, they have been lining the robot up to the airship in order to place the gears for competition. Furthermore, the subteam has been motion mapping and using autonomous algorithms that make programming autonomous easier and more consistent. Mr. Leicht is particularly impressed by the work the programming team has completed in the past week on motion 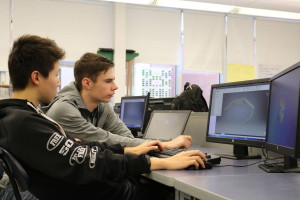 On the other hand, the Design Team has been working endlessly on Michael Leicht’s updates of the drivetrain. This week, they have successfully finished constraining the drivetrain, and subsequently started the drivetrain drawings. Design Captain Karina hopes to complete the drivetrain outline by the end of the Saturday meeting. The Design Team also aims to finalize the drivetrain and work on final electrical board designs in the future. They will start creating CAD models of shooter and intake system.

On the Logistics side of Team 1403, most of the subteams have been working hard preparing for the Chairman’s Award. The Business Team specifically has been strenuously working on the Chairman’s Essay and has completed the first rough draft. They have also been writing and revising the weekly Parent Newsletters. The subteam hopes to complete a final draft of the Chairman’s Essay by the end of next week.

In addition, the A/V Team has been busy with the Chairman’s Video by gathering clips that portray Team 1403 as Cougars, Montgomery High School’s mascot, following the theme that they are using. In addition, they have set up the equipment that is needed for the interviews that they will be conducting in the following weeks. 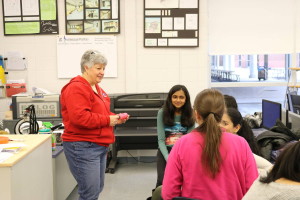 has updated the calendars to post in the room for March and February. Recently, they were asked to mentor a team and give them tips on website design. Furthermore, they have created an outreach tab for upcoming volunteer events on the Cougar Robotics Website and made edits to the slideshow of featured robots. Additionally, the members of the Communication Team have also been helping Business with the Chairman’s Essay.

Overall, Team 1403 has accomplished a lot over the third week through their phenomenal work ethics. However, Cougar Robotics needs to continue working hard to sustain their efficiency for the remainder of Build Season. Mr. Leicht emphasized to the team that we “can not do things serially, we have to do it parallelly”, meaning that tasks should be done at the same time to maximize efficiency.  The subteams are all working in unison and intermingling with each other to achieve their goals for the following weeks to come.