Cougar Robotics is closing a critical week in build season with impressive progress.  Mr. Leicht is “extremely proud of the robot prototypes that have been developed,” and he believes the team is prepared well for the coming weeks building the actual robot.  This past week, the team has developed a strong foundation for success in the rest of the build season. In the second week of the build season, the team has completed a prototype, which is a full scale model of this year’s robot. Recycled graduation signs from last year were used to make the prototype. 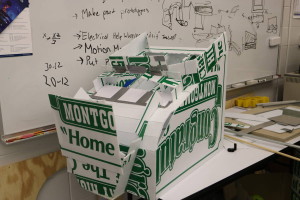 he shooter’s accuracy.  Both the teams have been testing the shooter diligently to prepare for build season because perfecting the shooter will be essential for success in future competitions.

Meanwhile, the Design team has been designing the main parts of the robot on Autodesk Inventor, a computer program. Design co-captain Andrew hopes to finish the three-dimensional model of the robot in the upcoming weeks.  Older team members have been working with younger members, to expand their knowledge of Inventor. Team members have been learning more advanced skills on the program so that they can continue to ma
ke the design for the robot. Team alumni Warren Venema has been mentoring the Design team in their efforts.

Additionally, Programming team captain Brian C. reports that the team “has been extremely productive this past week.” Currently, the team is developing the sensors for the robot 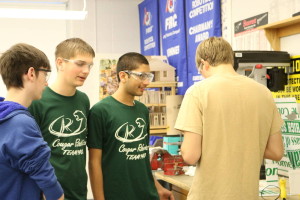 and working on vision and motion mapping. Brian hopes to configure Github, a website that allows team members to collaborate on pieces of code, so that Programming can start coding the robot soon. Mentors for the Programming team have been essential to their success this week.

Similar to Business, the A/V team is outlining their submission for the Chairman’s Award.  To help them brainstorm, the A/V team watched successful Chairman’s videos from past competitions. Finally, the A/V and Business teams have chosen a theme for their corresponding essay and video.   In order to document team progress, the A/V team started taking pictures of the robot’s progress and team meetings.

The Communications team has been updating the website with recent articles that the Business team has wrote. In addition, they have been preparing a Power Point that describes the past robot designs of the team.

The Strategy team has been st 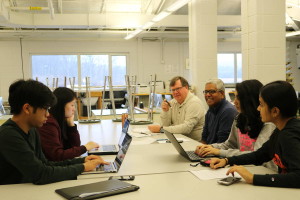 udying the game manual and brainstorming potential strategies for the robot. Similar to the Programming team, mentors, who work in strategic fields, have been extremely helpful to the Strategy team. Currently, the team is creating forms that team members fill out in competitions in order to document the strengths and weaknesses of other teams. The members of Strategy have been preparing a presentation that will explain the form to all members of the team.

The Outreach Ambassadors have been contacting sponsors, and  preparing for a demonstration at the Invention Convention for the Montgomery Middle School science fair. Outreach Ambassador, Aparna has been organizing volunteer events at Rock brook School because Team 1403 has been partnering with the students of Rockbrook for the past few years.

Overall, the sub-teams continue to make progress on the robot and Chairman’s Award, preparing for upcoming competitions.  Week two has served as an important foundation for the team to utilize in the rest of the Build Season.