After the Steamworks theme for this year’s FIRST competition was officially announced, Montgomery FIRST Team 1403 started off the build season with fervor and extreme enthusiasm. On the Monday and Tuesday following Kickoff, the team made designs for each part of the robot and point strategy. On Wednesday, there was a night meeting with the mentors where Team 1403 was able to clarify certain points and get started with a plan. For the rest of the week, Team 1403 has been working diligently together on the robot prototypes.

On the robot side, members have been brainstorming different prototype ideas. The Mechanical sub-team has divided themselves into g 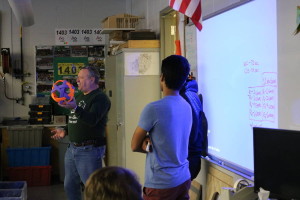 roups to allow them to work on multiple prototypes at once in order to maximize efficiency. Mechanical team has reused the graduation signs from last year to build a robot box to show dimensions of the different robot prototypes. Essentially, the robot boxes allow members to visualize the volume of the robot so that they can decide on the final robot prototype and the size of each robot component. Examples of the prototypes that were discussed include the Fly Wheel Shooter, Gear Holder, and Upper Bumpers on the Chassis.

Although the Programming sub-team has few programming tasks for the week, this obstacle did not hinder the amount of work they got done. By working together with the Mechanical sub-team, they have helped build the prototypes for the robot. Additionally, Fourth-year member and programming sub-team captain Brian Cheng announced that they have made progress on vision tracking. In the next few weeks, Cheng hopes for his team to write code in preparation for a 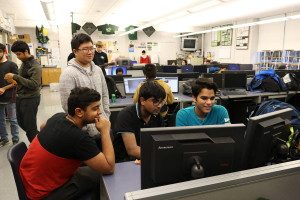 ny parts that are going to be wired to the robot.

The Design team has the challenging task of designing various prototypes of the robot.   Sub-team
captain Karina Zhang aims to finish the robot prototype on the software, Autodesk Inventor, in two to three weeks. Currently, the captains are teaching their members specific skills in Inventor. Some members are also learning about the electrical board, and are currently working on pneumatics. Overall, Design has been fully utilizing and investing their time in the Inventor program to prepare for designing prototypes in time for build season. 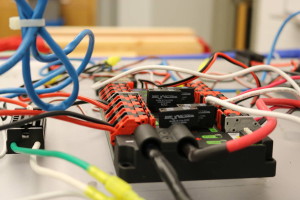 Communications have been editing Cougar Class Pictures and as a long term project and replaced outdated pictures with newer ones, they plan to start add code to allow people to go on website with different languages. Recently, they aim to increase the team’s social media presence as well; Humans of Team 1403 is scheduled to go up shortly on Instagram. They also posted the kickoff video that was made by the A/V team and the Kickoff article written by the Business Team.

The Strategy team has been working on planning out the forms and determining the strategy that will be used for the competition. At the team meeting that was held the day after Kickoff, they presented the rule book to everyone and explained came up with possible ideas for the competition. They plan on finishing the aspects tha 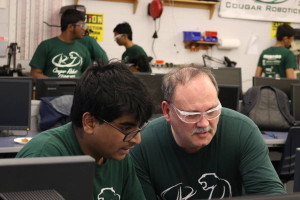 t they are focusing on for the game today and possible start creating the forms for the tablets as well.

It may have been only the first week, but Team 1403 definitely not rusty with their hard work and effort. Many mentors came to the Saturday meeting to help out with various team on the robot side and help organize ideas for the prototype. Because it was the first week, members got to know each other and their mentors much better along with learning many more skills.