On Saturday, January 7th, 2017, after months of anticipation and hard work, 31 teams gathered in Skillman, New Jersey at Montgomery High School for the 11th annual kickoff, which officially starts the build season.

Before the official Kickoff was broadcasted from Manchester, England, students got the opportunity to attend workshops held by mentors and Team 1403 members to learn about different aspects of robotics. The workshop topics included pneumatics, gearboxes & transmissions, and sensors taught by Mr. Nick Trohalides, Mr. Michael Leicht, and Mr. Jeff Bernardis respectively. T
he design sub-team of Team 1403 held a hands on inventor workshop, in which students used the computer program Inventor to design their own

project. Team 1403 also had the opportunity in guiding Upper Middle School students in the FLL program throughout the event, which exposed them to the process of kickoff in high school robotics. Being able to witness many high school teams in one location, FLL students were able to learn the challenges and advantages in being part of a high school robotics team.

After all the workshops had concluded, the teams gathered together in the Montgomery High School Performing Arts Center for the revealing of this year’s challenge. The center was almost filled to its full capacity. As part of the Pre-Kickoff Event, Mr. Scott Pachuta and Ms. Heather Pino, vice principals of Montgomery High School, started off by sharing their visions and advice about success, dedication, commitment, hard work, teamwork, and resilience. They were later joined by Mr. Shah Dabiri, representing a major sponsor of many robotics teams in our area, Picatinny Arsenal. Mr. Shah Dabiri gave an inspirational speech about the magnitude of volunteering in robotics programs and the bright future of students in robotics.

After a long and enthus 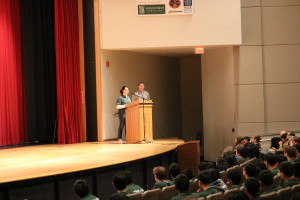 iastic wait, the Kickoff was broadcasted from Manchester. This year’s game theme is FIRST Steamworks. There are two airships and two boilers on the playing field. Alliances must attempt to get their airships flying by completing two challenges. First, teams can bring gears from human players to the airship. A human player, called a “pilot”, places the gear next to a rotor on the airship. The goal is for teams to place enough gears to allow the airship to “take off” at the end of the match. To “take off”, with full flying capacity, all four airship rotors must be moving at the end of the match. The second challenge is supplying fuel to the boilers. Fuel is represented as large plastic balls and can be placed either through the high or low opening on the boiler. Teams that shoot into the high goal receive more points per ball scored in the boiler than teams who shoot in the low goal. In the last 30 seconds of the match, pilots standing on the airships deploy ropes. Robots can earn points by climbing the ropes and suspending themselves off the ground, so that they are ready for “take off” at the end of the match. Once the game was revealed, teams were able to preview handmade game pieces on the auditorium stage.

Although the event had last only a day, Kickoff brought many robotics enthusiasts, including FLL middle
school students, together to learn from each other. Furthermore, it helped many Team 1403 members gain leadership and communication skills, through volunteer work. Most importantly, it served as a place for everyone to meet and socialize with new people from different schools who have the same interests.