The final Cougar Class took place on December 14th, 2016. As students entered the classroom, Michael Leicht started his presentation about the importance of responsibility, and sharing personal anecdotes to entertain and educate the students. At the end of the presentation, all the students learned an important lesson: one should always take responsibility for his or her actions. 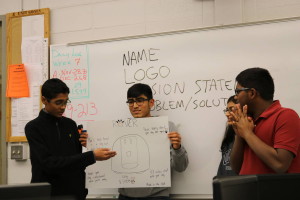 After the presentation, the students partook in the last Cougar Class activity, which featured Team 1403’s annual “Shark Tank” activity, inspired by the FIRST Lego League (FLL) Robotics. This year, the FLL challenge is “Animal Allies”, which encourages students to combat a specific issue that negatively affects animals.  Teams were directed to present an invention that solved this problem to a panel of five judges, or mentors. As teams brainstormed, they also designed a poster that had to include the team name, team logo, and mission statement. Students were given the unique experience of posing as an entrepreneur and creating their own product. Team members needed to come up with their own company and brand in the span of thirty minutes. Creative inventions included a team named “Oh Deer!” that had special headlights that would avoid the deer from stopping in the middle of the road when a car drove by (thus preventing car accidents with deer), and a team with the intelligent slogan “Yes, We Can!” that featured a decomposable can that would reduce the waste in the oceans, thus benefiting ocean life. 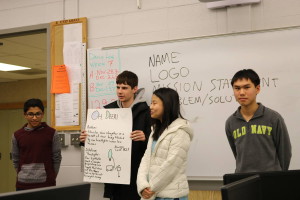 In the end, the winning team demonstrated good effort, practice, clarity and ingenuity that stood out from the others. Their product was a mechanism that prevented cars from crashing into an unexpected encounter with a dear at night. Additionally, a student, Vibhu Iyer, won a hundred dollar gift card for being on the winning for the most Cougar Classes. The event allowed students to go through a similar experience as the middle school students, giving them an insight to the hard work the middle school students had to put in.