As the end of build season draws closer, the Robotics room is filled with the frenzied energy typical of Week 5 of the build season. Each subteam is focused on keeping the momentum to make the necessary progress to be ready for the quickly approaching competition season. 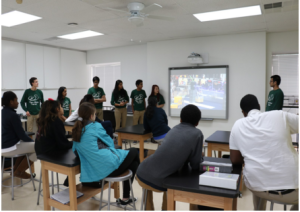 In addition to getting the robot ready, Cougar Robotics has also been busy with multiple outreach initiatives. This past Wednesday, the team gave a demonstration at the Cambridge School. To introduce the team, Team 1403 explained the principles of FIRST and how the team embodies the     m. After seeing videos of past competitions, students learned the engineering design process that is instrumental to building the robot. They were then able to apply those concepts by participating in a group activity in which they had to design a hurricane-proof house. 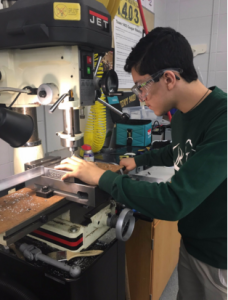 Finally, Team 1403 introduced students to VEX robots and let students practice driving them. All of the students were actively engaged and thoroughly enjoyed the challenges presented to them. Along with the Cambridge School demonstration, six members of Team 1403 volunteered to go to the Rockbrook School, bringing along VEX robots and Lego kits. Both demonstrations proved to be immensely successful as students were enthusiastic and involved. 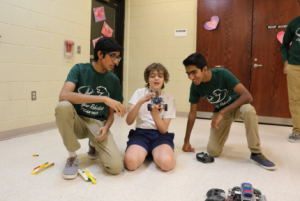 Aside from the team’s success with outreach, the Robot side of the team has been making impressive headway with the assembly of the robot. The Mechanical team riveted the frame on the robot and assembled the fr
ame for the shooter. They also finished creating the drive frame transmission and mounted pneumatic wheels in order connect the transmission with the wheels pulleys and belts, further improving the robot’s drive mechanism. Mechanical team captain, Faraz K. presented the finished drivetrain, which Mechanical will test to see if it is compatible with the regular drive system. The Mechanical team is also working to finalize the intake for the shooter.

Working alongside Mechanical, the Electrical team worked to wire a basic electrical board for the drive train, crucial to allowing preliminary tests for robot mobility. Electrical Team captain, Brandon Q, expressed optimistic visions for the team. “We are currently making great progress, but we still have a lot to do,” he said. “We still have to build the actual electrical board and find a place to mount the battery. However, I am confident the robot will turn out great and we will be an extremely competitive team this year.” 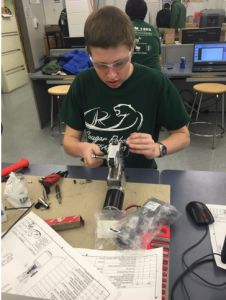 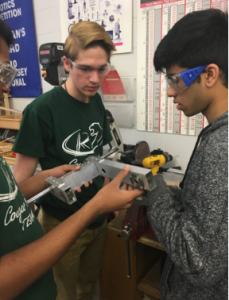 With the Robot side teams hard at work, the Logistic Teams have made equally notable progress. The Business team continues to move forward with the team events sheets and weekly newsletters, both vital to Team 1403’s extensive team documentation. Along with the event sheets and newsletters, the Business Team has also been assembling the Chairman’s Presentations binder, and has contacted Team 1403 alumni on the progress of this year’s Robotics Team.

After the completion and submission of the Chairman’s essay by the Business Team, Audio Visual is currently producing the Chairman’s video. With the assistance of the Communications team, Audio Visual interviews team members and writes the script for the video. The majority of the video has already been filmed and Audio Visual hopes to have a finalized version soon. In addition, the subteam has been taking photos to document community service events, such as the demonstrations at the Rock Brook and Cambridge schools. 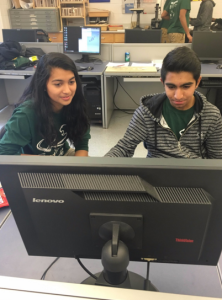 In preparation for competition season, Strategy has finalized a third version of its match scouting form, and is looking forward to using it for Mount Olive. The team has also uploaded it on its tablets and will be holding tutorials for the entire team over the next two weeks. The data collected from this form will help the team with alliance selections at this year’s competition.

Overall, Team 1403 has been making huge strides on both the Robot and the Logistics side of the team. The remarkable progress being made each week leaves the team feeling increasingly optimistic about the approaching competition season.