Entering our last week of Build Season, FIRST Team 1403 is collectively working together to put their final 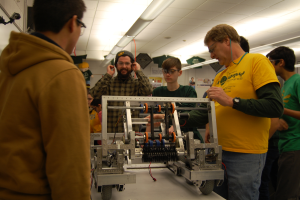 touches on their product. After a successful five weeks of build season, all of the sub-teams are almost finished with all of their assignments

Team Captain Rhea K. is pleased with the work being done stating, “[e]very team has been working hard to make our finished product the best it can be, both on the robot and logistics sides. I am really proud of the progress that has been made, and I am very excited as we move towards competition.” With the final few days of build season left, Rhea is optimistic that 1403 has a successful competition season ahead of them.

The Mechanical team has finished the frame, and mounted the shooter and the pickup system of the robot. They are finishing the trigger to move the ball from intake to the shooter during a match and working alongside the electrical team to design, cut out, and begin mounting parts on the electrical board. Both Mechanical leaders are pleased to see the robot coming together and are confident that its unique and effective design will allow it to perform well in competition. 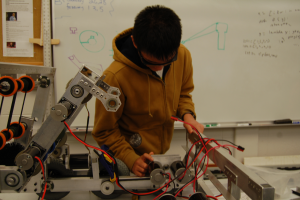 Working closely with the rest of the Robot side teams, the Programming Team has continued to make progress. The team finished two-dimensional motion mapping and has nearly completed vision tracking, with the only outstanding task left to do being running tests for robot specific constants. The work that the programming team has been doing with both vision and motion mapping makes this season’s robot arguably one of the most innovative in 1403’s history in terms of automation in control. 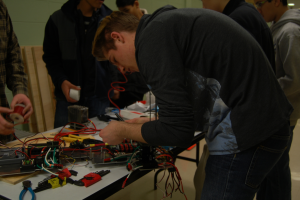 With the rapid speed at which the team is moving forward, the Business  and Communications team have been keeping up with team documentation, with Communications keeping the website updated, and Business continuing to send out newsletters. Captain Brenda L. states, “[w]e are working on the sixth parent newsletter, alumni newsletter, and the team event sheets, as well as assembling the binder for the Chairman’s Presentation.” Brenda directs her teammates to finish up the last of important documents. 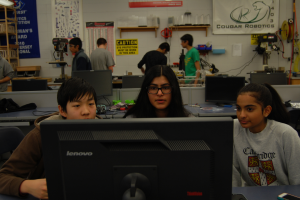 Strategy has consistently maintained its progress. Last week, the team held tutorials for match scouting and using the tablets for the team and will be finishing in the coming days. This week, it is focusing on teaching the members who will be participating in the Mount Olive event. Strategy is also pre-scouting for the teams in Mount Olive to see the supplies it has there and has been very busy in helping the team develop further ideas for competition.

With the assistance of Communications, Audio Visual enters the final Saturday meeting for Build Season and has finished up with shooting all the scenes for the chairman’s video, including interviews. They are continuing to work on the backdrop pictures for the presentation. Furthermore, A/V has edited the team photo, which was taken last week, for the yearbook. 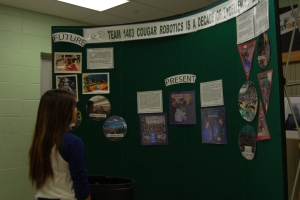 The past 5 weeks have been both rigorous and rewarding. With the insurmountable amount of progress achieved by members of Team 1403, we are excited complete our final week of build season and officially start competition season.