The progress during the past couple weeks has been hindered due to the snowstorm but Team 1403 has bounced back this week and made significant headway. Each sub team worked tenaciously during the week to get back on track. As the fourth week of build season progressed, each sub team remained oriented upon the continuation of efforts to complete the various aspects of the general improvement for the robotics cause. 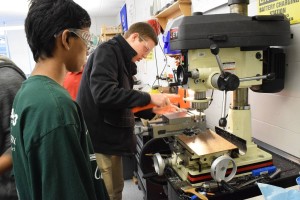 For this past week, Mechanical team has been engaged in starting to design the robot in accordance with the blueprints already established by the design team. New members were introduced to the process of the actual construction through the tutorials on the use of particular devices. Furthermore, these new members were able to actively partake in the development of the robot by fabricating parts for the robot. While these members are continuing to familiarize themselves with their tools and tasks, it has reached a stage in which the team is prepared to commence the physical building of the robot.

Meanwhile, the electrical team has been preoccupied with the logistics and organization in regards to the robot. They have inventoried and listed the parts required to build the robot, and sub team captain, Brandon Q., has expounded upon other jobs that electrical team is tasked with, saying that the team will, “Begin developing the electrical board this week”.

Another portion of the people delegated to work on the robot, programming team, has made significant strides in the completion of their work. Motion mapping in one dimension has been finalized, as well as their efforts in vision tracking. Programming team captain, Aman K., explained, “We are optimistic about finishing 2-D Motion Mapping by the end of this week”. 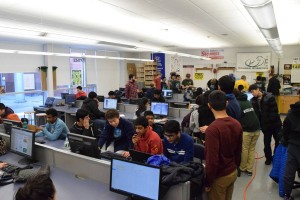 Design team held up with the pace set by the other teams on the robot side by finishing the CNC transition plates. As such, they have been able to expedite their efforts on the drawing for the tested shooter. They have also managed to include both dimension and wheels in their newly finished drawings. Now, they are beginning to work on the drive train and are feeling optimistic about adding more CNC parts. They have now set their sights even further, hoping to finish up the drawings for the entire robot within the next week.

Assistant Robot manager Thejas J. seems rather satisfied with the efforts of the teams on the robot side this week. “We have made a lot of progress this week to make up for the time lost from the snow days. We are optimistic that we will get a bot done in the next week.” Much of the necessary work prior to the construction of the robot has been finished, such as the parts and drive for the shooter, as well as the finalization of 1-D motion mapping. These accomplishments are accommodated by potential design layouts for the electrical board being made. Overall, despite being split into four different sub teams, there has been adept coordination between the teams on the robot side.

With the teams on the robot side engrossed in their own work, teams on the logistics side have been busy complementing the work done by robot side. For business team, there was substantial headway made on Chairman’s and Woodie Flowers essays, with both of these being submitted this week. Although the essay for Chairman’s has been submitted, the video and presentation must still be finished, and business team will be working in conjunction with Communications and A/V on those. Now, the focus has been oriented towards communicating team efforts to parents and sponsors by finishing work on the newsletters. 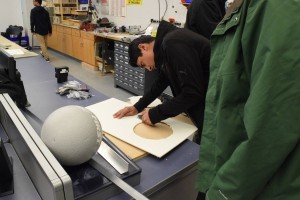 Having finished the website in prior weeks, Communications is now busy with other projects such as Chairman’s, but they have still done weekly checkups on the team website to ensure everything is working in an optimal manner. For Chairman’s, Communications is working with both Business team and A/V for the presentation and the Video. A/V has been working on making a script and storyboarding for the Chairman’s video. They also have completed the team photo board and team standard.

Though most teams on the logistics side are working on projects pertaining towards expressing the values of the team, Strategy has been finishing projects that are an integral part of the physical competition. “We are finishing pit and match scouting forms, acting out the challenge to familiarize ourselves with the forms and perform a final check for mistakes, transferring the forms to all the tablets” is what Strategy team captain Lorraine Z. said. In order to allow members of the robotics team to be acquainted with the scouting system used, they have begun to work on a tutorial for the scouting.

The fourth week of build season for Team 1403 has been extremely busy because of the snow but our team has been able to reach and surpass all of our goals. Team 1403 hopes to complete the robot within the next week to allow the drivers to start practicing.