Despite Winter Storm Jonas’s decimating the east coast this past week, FIRST Team 1403 still maintains its level of progress. As shown through interviews with Team 1403’s captains, the entire team is working together cooperatively to finalize efforts related to the prototype, making up for the lost week.

Team Captain Rhea Kulkarni is proud of Team 1403’s progress despite the storm. She works hard to encourage and motivate the four subteams, Electrical, Design, Programming, and Mechanical. When asked about her thoughts on Team 1403’s progression, she responded, “[w]e are working really hard and doing what we need to do. The weather put us kind of behind. We’re making up for that and we’ve got a really solid design, as well as a good idea for the robot. We can start cutting metal for the robot next week.” 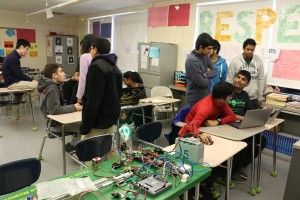 Robot Manager Vish has been working hard to keep the teams on track with the production of the robot. Even though the snow has delayed the progress, he reports, “[s]o far, we’ve finalized prototypes and the bot design, we’ve talked to mentors and compared ideas for the robot, we’ve made some tests with prototypes and are about to start cutting metal, so by this week, we want the drivetrain done and hopefully finish robot in two weeks or so.”

Electrical co-captain Brandon Qiao clarifies Electrical’s progres, stating, “[o]n the practice robot, we have mounted the encoders and all the sensors that programming uses to test motion mapping. We’ve also finished standards.” The Electrical team has made significant strides in establishing the prototype, but there is still a lot of work to catch up on. Co-Captain, Abhinav Gurrala stays focused and takes a moment to tell us his progress on the robot. “We were mainly focusing on prototyping and ideas in terms of how the ball will go through the goal,” he added. “We’ve decided on the shooter, which are 2 wheels that spin out in two different directions. We’ve tested the idea and it works really well, we can get farthest and closest distances, we’ve figured out the distance between wheels, not the final one but the initial practice robot, and we’re trying to cut metal today so we can start working on our actual real robot.”

The Design Team remains focused on completing the drive train and the field elements. Moving forward, they are starting to create the parts of the robot by using the program, Autodesk Inventor. “With the prototyping period, now that we’ve completed field elements, we’ve been working on actually creating parts of the robot,” Design Captain Arjun Kotwal confidently said. “We’ve modeled them successfully with the prototypes. The drive train for the most part has been finalized except for the minor additions along with the shooter system. There will be a number of other systems that 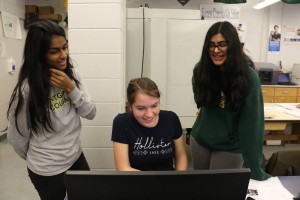 still have to be done, and we’re beginning to design those as we speak, and that should be finalized by Friday or Saturday.”

Programming is working on the sensor component of the robot. They have created a model of the “battlefield” and are planning the most efficient way for the robot to travel on the field during the competition. Captain Thejas Kadur provides a description on what Programming has done this week. “That’s our model of what the tape around the goals might be, and you can track it,” he says, pointing towards the board. “If you look at the computer screen, you can track that point which is going to be a target of the robot. We also have motion planning going which allows us to take smooth curves for the shortest path possible on the field and take points on the field accurately.”

Mechanical has been keeping up with staying organized and have set goals to assist the progress. Team captain Faraz Khan explains his thoughts of the progress of his team and what he plans to do for the next few weeks. “We’ve been going through all of our inventory, nuts and bolts,” he said. “All the cabinets and the boxes are a mess so we’re going through and making sure we sorted them out by size. So during this season we can get them exactly where we want to and it’s easier to find them. As far as robot progress, we’ve decided on our low bar goal and building a robot that goes for that. So Vish and Tejas have been working with the other mechanical members to work on prototyping, they’ve come up with an efficient flywheel design that works all the time, so that’s good. And then as far as next week we are going to continue doing prototypes and build a robot by the end of the season .”

While the robot side of Team 1403 has been working with prototyping and preparing to start cutting metal and building the actual robot, Logistics Team Manager Deven Shah is proud of the progress Logistics has made. “So far all of the teams are working hard,” he said. “And for the next couple of weeks, build season has just continued on track. If everyone just keeps the pace they’re going, we 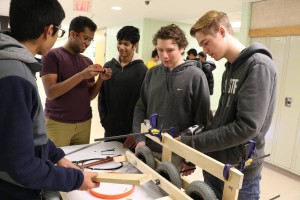 ’ll hit all our targets by the end of build season.”

Business has been busy working on essays for Robotics, including Chairman’s and Woodie Flowers. Brenda Lee, captain of Business, adds, “[b]usiness has been working very hard over the past two weeks despite the snow. We finished the parents’ letters for last week, and we’re finalizing the Chairman’s and Woodie Flowers essays.” She is focused on keeping the Business team on track and on schedule, ensuring that Business does not fall behind. Though she stresses the importance of completing the essays on time, she also establishes a relaxed environment for the Business team.

Communications continues to work on the website. It has kept to the same plan from week one of build season–making the website live. Captain Aparna C. expresses the progress Communications has made regarding the Robotics website. “Over the past week, Communications made the new website live, and we’ve been continuing to update pages including the archive page and the home page,” she said.

Meanwhile, Strategy has shown clear development from last week, and have built up momentum. “The last few weeks we have made our first version of all the pit and match scouting fields,” Strategy Captain Lorraine Zhang said. “This week, we’re just finalizing them into tablet and maybe testing them. The next couple of weeks, we’re going to test them and simulate the game to make sure everything works.” Lorraine provides Strategy’s goal for the future weeks, as well as progress made in the past weeks.

As for Audio Visual, the team has finalized the photo board of all the members and mentors for Team 1403. Paul Nusbaum, captain of the Audio Visual team states in an interview of the their goals for today, “[w]e are working on getting the photoboard done today, and getting the design sketched out for the Chairman’s video.”

The Outreach Ambassadors have been reaching out to many schools to advocate robotics and this week they are focusing on the Cambridge and Rockbrook school. One of the two Outreach Ambassadors, Alex Jain, states,“[r]ight now, we’re working on the Cambridge school and the Rockbrook, which are two special need schools. We’re bringing in VEX robots and providing a presentation about what exactly we’re doing and exactly what the robotics is. We’re giving them an inside look to engineering and design principles. We’re also making courses and challenges for them and also looking into a food drive where we can collect food for the montgomery food drive and show the community our involvements in robotics.”

Furthermore, mentors Mr. Leicht and Mrs. Leicht have commented on FIRST Team 1403’s improvement from last week. Mr. Leicht adds, “I’m hoping we have our designs for our frame structure and drivetrain by the end of today.” In addition, Mrs. Leicht states, “[w]e’ve just been working on the website and finalizing the Chairman’s essay.”

Despite the delay due to the snowstorm last week, Team 1403 Cougar Robotics has persevered and made a great deal of progress. The encouragement given from the team captains and mentors has greatly motivated us to push ourselves to accomplish and make up for the lost time. The team is officially at the midpoint of the build season, and is right on track.