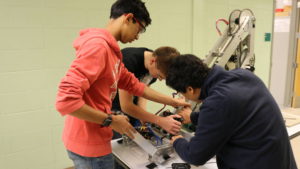 FIRST Team 1403 Cougar Robotics Newsletter Build Season: Robot manager Niva S. is extremely proud that the team has produced a fully functioning robot. The robot can successfully perform all the tasks that it is supposed to, and robot side is finalizing the robot and preparing it to be bagged on Tuesday. In addition, the team has named the robot “Armstrong” after the astronaut Neil Armstrong to fit with this year’s space theme, and to show that the main feature of the robot is its powerful arm.

The Mechanical sub-team has been fixing and refining the little details of the robot that will make sure it will work properly in the competitions. This week, the robot has been weighed to make sure that it fits requirements. Since the robot has been completely assembled and running, Mechanical has been working with the other Robot sub-teams to ensure best performance in the last week of Build Season. 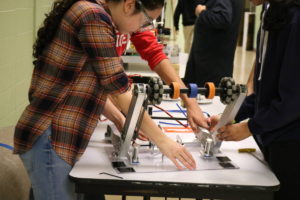 The Programming sub-team has changed their algorithm for the vision targets to make it more accurate. They have been working on incorporating the Echo program from last year so that the robot can run by itself during the autonomous period. If the Echo program malfunctions during the match, driver Vineet can always override it and control the robot manually. Programming has been working on cleaning up the code and fixing bugs. 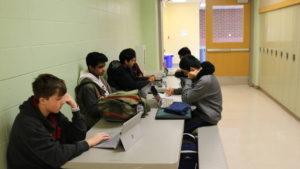 This week, the Logistics side worked on finishing up the Chairman’s video script and working on finalizing team standards for event sheets. Templates have been developed for the documents that we put inside our binders, so that each sub-team can easily use it for their purposes. The Logistics manager, Pranav S., is glad that the team is reintroducing a standard format within our binders. He is also proud of the A/V sub-team for working so hard to get the script completed.

Business/Communications has finished and submitted the Woodie Flowers essay, and they are now working on the Donald Bowers essay that is due in a few weeks. They have also been working on this week’s parent newsletter, as well as continuing to make adjustments to the team website. With the Chairman’s Essay completed, Business/Communications has been working on finishing the Business Plan and a few other small things for the end of Build Season. 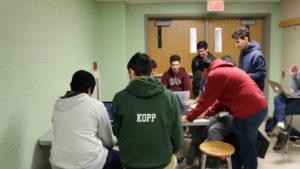 Outreach has been working on the details for the upcoming Women in STEM event, where female professionals in science and tech fields are invited to speak about their experience in STEM. This event will also be a volunteer opportunity for the team members, and an opportunity for women on the team to learn more about what it is like to work in STEM.

This week, A/V has continued to take pictures and record videos of the team’s progress. The script for the Chairman’s Video has been completed, so they have begun creating the voice-overs for the video and collecting the footage clips to use. The pictures and video that A/V has collected throughout the season will be able to be used to create the final Chairman’s Video.

The Strategy sub-team has been continuing to make some alterations to the scouting form and have been practicing scouting. They have also established connections between all of the scouting laptops. With competition approaching, Strategy will soon have an opportunity to put their preparations into practice for match scouting.