FIRST Team 1403 Cougar Robotics Newsletter Build Season: By week five, the robot has been completed and running. Team Co-Captain Vineet will continue to practice driving the robot to ensure everything works. The robot side has been making sure that the camera and vision system work properly for the blind period during the matches. Overall, the goal is to the get the robot to be competition ready, and so far the team has been ahead of schedule, as they have a robot up and running by the end of week five. This allows us to spend more time troubleshooting and making small adjustments to the robot. 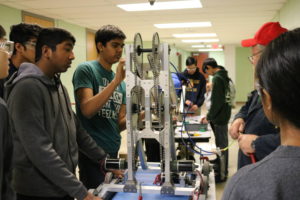 This week, Electrical has finished wiring the entire robot and has been making sure that the robot is fully functional. In the upcoming week, Electrical plans to work with Mechanical, Programming, and Design to fix anything that might not work before competition. 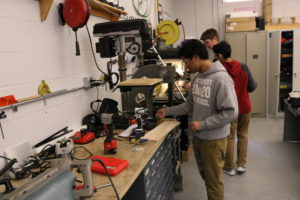 Programming was able to get the vision system working so that the robot can lock in on the target using the camera. They plan to work on moving the robot forward using the vision code, as well as moving the arm to create a seamless control system that will operate with precision at competition. Programming will also improve the control systems on the robot so that it is easier for the operator to use and continue testing the robot to make sure everything works.

Design has been looking into setting up a VR field for our robot, which is something that was introduced by FIRST this year at Kickoff. They have also been making sure that all of the drawings are current and up to standards. This year, Design has paid particular attention to reviewing all of the drawing made with mentors for quality assurance when parts are eventually manufactured. Design has also been continuing to make parts with the CNC and drawings as Mechanical needs them. 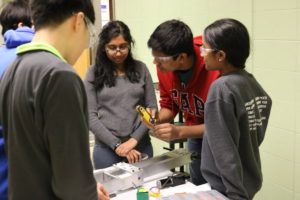 The Logistics manager, Pranav S., has been working with Logistics, Administration and the mentors to create the final version of the Chairman’s essay, as well as the Executive Summary and Donald Bowers essay. The Chairman’s video has also been complete, and with the script for the Chairman’s presentation complete the presenters plan to start practicing it.

Outreach has been planning for upcoming volunteering events, including Kids Tech Night on February 14 to introduce children to new technology and STEM. They have also been sending volunteers from our team to the Lower Middle School to help a new robotics and programming class that is planned to happen with one of the teachers, Ms Young. Outreach has also set up mentoring opportunities for a rookie Girl Scouts FLL team to help them with programming their EV3 robots.

A/V has been working on updating the mentor photos for the website, with the Chairman’s video being finished for this year. Logistics has finished most of the work that was set out in preparation for the upcoming deadlines for awards submissions. A/V has documented the progress of our robot from the start of build season until now, and plans to continue this for the last week of build season. 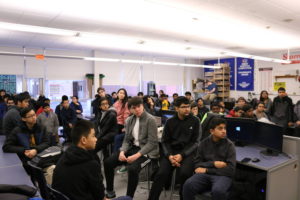 Business/Communications has finished the Chairman’s essay and executive summary, as well as the Chairman’s presentation and the Donald Bowers essay. They have also finished redesigning the website so that it has the best look and functionality. Business/Communications continues updating the website, compiling documentation on our team and robot into binders, and working to complete the business plan for this year.

This week, Strategy has been practicing with their wired network and plan to make improve scouting to make it more accurate. As build season comes to a close and competition approaches, they hope to make sure that the strategy preparations are complete and to ensure our best performance. Strategy has finished up almost all of what they planned to do at the beginning of build season by the end.

With the end of week 5, Team 1403 has been making final preparations for competition. From the improved schedule this year, we are able to work faster and more efficiently to have our robot finished sooner than before. Our team will continue to work hard so that we are ready to perform our best at competition, and the approaching end of build season is proof of the effort that every team member has put in so far.