In past years, Team 1403 has found itself in a duel against time. They have often rushed to finish the robot, and have paid the price during competitions. This year however, the situation was different- the team making extraordinary progress during every week of the build season. Week Five was also another week of amazing productivity, with the various subteams utilizing their knowledge to effectively solve problems they encountered and move on in their endeavours.

Members of the robot side have worked diligently to finish the robot in time. Robot manager Aamhish R. is impressed by the progress the team has made. Week after week, he has expressed his enthusiasm and states that the team is in good shape. Following the advice of the mentors, he believes that the team should keep everything simple. He wants the team to focus on simply finishing all essential parts of the robot, prior to making finishing touches. Aamhish highlights that during the game, everything should move smoothly and properly. He expects the robot will be finished early in Week Six.

Mechanical has been working to finish the robot. They have completed the main structure, and they are now finishing the elevator and intake system. Last year, the team noticed that their robot was too complicated and that their attempts to create a complex machine resulted in issues. This year, they strived for simplicity, recently making several edits to the robot in regard to this ideology. For example, they decided to only go for one of the balances during the competition, instead of both. Their goals for the last week of build season is to complete the robot and make a few finalizing edits to its design.

Electrical has worked on the electrical board, which was created in the CNC this week. They have placed it in the robot, and the are making finalizing edits. They have also been working side by side with Mechanical with the physical creation of the robot. They hope to have the robot created and completed, and they plan to edit any issues they have with the batteries and electrical components. In addition to the electrical board, they have mounted the TPG (Talon Parking Garage) on the robot as well. 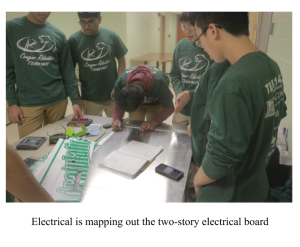 Design has continued to plan and create several new sketches for certain of the robot, such as the intake and the roller claw. They give these designs to other members of Team 1403, and they create them in the CNC. As the robot is being completed, Design has also been ready to create any new sketches based on the requirements of the robot. 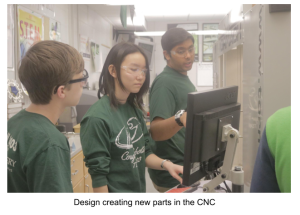 Some of these final improvements include designing the bumpers, the signs and logos, and the electrical board. In addition, they have continued to create the CAW, which is a way to track the money spent, and allot the rest of it for the future.

On the Logistics side of the team, the ed the Chairman’s Essay and has submitted it to FIRST for further judging and the possibility of winning a prestigious award. With the completion of this prominent submission, the subteams that make up the Logistics side continue to work diligently on other activities such as Outreach events and the Chairman’s Video. Logistics Manager Nive B. has a goal to complete these tasks.

Business has composed several weekly newsletters that the parents read. These newsletters are paramount as they are documentation of what we have done as a team. These newsletters also provide the Robotics community a look into our team, making Team 1403 a standard that other teams aspire to meet, since they are posted on the website. Business has finished working on the Woodie Flowers draft and has submitted it. Currently, they are working on the Chairman’s binder, a series of documents detailing several aspects of the team. This binder is paired with our Chairman’s Essay, making this an important task to complete in the following week.

This week, Outreach emailed professors from various different universities, asking them for their participation in our Women in STEM event. Outreach also contributed to the Chairman’s essay and the writing of our Chairman’s presentation. With their help with the essay, Logistics was able to submit the essay on Wednesday, February 7th. Their goal for the rest of Build Season is to finalize the speakers for the presentation by next week, as well as to finish our team’s schedule for the District Event.

A/V has edited photos and taken videos for the Chairman’s video. At the end of Week Five, they began recording voice overs for the video. Currently, they are taking pictures of the team to send to Communications, who will then upload it onto our social media accounts. Before they are sent to Communications, the pictures are edited with programs such as Adobe Lightroom and Adobe Photoshop. These programs significantly improve the quality of the pictures, and make them more appealing to their viewers.

Strategy has recently finished the match and pit scouting forms, and they are working on editing and memorizing the plays from the playbook in preparation for the competitions. They printed out all the signs according to our codes, and placed them on legible posters. Each set of pictures has a specific meaning for our drive team, with some examples of signs being Pokémon pictures and Mickey Mouse pictures. In order to use these signs properly, they need to practice when to hold up them up.

With the conclusion of Week Five, build season is quickly coming to an end. The team hopes to finish the robot in the upcoming days and compete successfully at competitions. If parents or members in the community are interested in volunteering for the upcoming FRC Montgomery District Event, they are encouraged to contact 1403 and sign up!