Team 1403 has worked vigorously throughout the course of the Build Season. Week Four was no different, with the mentors stressing to the students the importance of making progress with the limited time remaining. Progress was delayed due to some testing difficulties, however, the team has kept its composure during these times and worked in unison to come up with solutions.

Robot Manager Aamhish R. reports that most of the roller claw has been finished, intake design is finalized and drivetrain has also been completed, which are both great steps forward for the team. His goals for this week are to finish the robot as soon as possible since testing must be done. While the team has done well, he, along with mentors, wants to make sure that no issues arise. If any team member does not know what to do or how to do it, they are encouraged simply 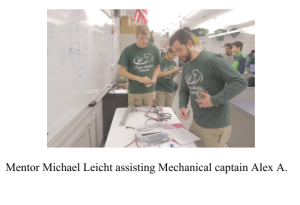 to ask for help from more experienced team members or the mentors.

With only two weeks remaining in the Build Season, Mechanical completed the drivetrain, the part of the robot that allows it to move, and place it on the bottom of the robot. Their goal is to finish building and testing the robot before the competitions commence.

Electrical has been working on the talon holder, the Talent Parking Garage (TPG) and they have laid out the design for the electrical board.  Several team members have aided Mechanical in its work, in order to increase their productivity. Next week, they will be making and mounting their electrical board.

Programming made modifications to their Echo program in order to make it run more efficiently. While this new program has been completed, it has yet to be tested. In addition, Programming has helped test prototypes for the intake with Design and Mechanical. Programming has also completed the robot code and only need to place it in the necessary ports. For the coming week, they plan to have everything completed for the final robot, all fully programmed and tested. 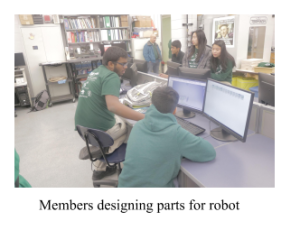 Design has been working on developing additional CNC parts for the robot. Currently, they are working on CAD designs for the intake. Design is working to create solutions for any roadblocks they come across. Their goal is to finish making all of the parts necessary to assemble the robot. Design has been productively working to create these parts in preparation for competition. All members have been putting in time and effort to finish CAD.

With the deadline for Chairman’s approaching, Business has been finishing up the essay and making modifications. With the help from other subteams and mentors, they have accumulated a variety of information about Team 1403. Other members have also worked on other projects such as the Donald Bowers’ and Woodie Flowers’ essays. These essays discuss the influential work put forth by a various mentors. In addition, they have been working on their weekly newsletters, which describe the progress made by the team thus far.

This week, Outreach continues to plan more events in the upcoming months. As part of Logistics, they are also contributing to the Chairman’s Essay and the executive summary portion of the submission. This consists of several questions regarding the growth and success of Team 1403. However, Outreach’s work does not end there. The subteam has also been aiding Business with the Chairman’s Essay, providing information on the sections pertaining to community service and outreaches. 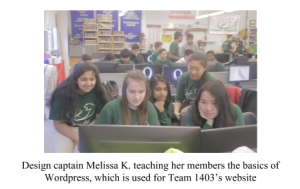 Communications has been updating their various social media accounts, posting images of the team through facebook and instagram. On the Team 1403 website, they have also uploaded the weekly newsletters and pictures of progress. In doing so, they have kept parents notified and increased our presence in the community.

Strategy has finished their match scouting forms, which is used to decide alliances on competition day. They are also continuing to create a playbook for the drive team as well, which consists of several codes and symbols to relay specific messages. These messages are used by the people in the pit, and they represent different strategies for them to take. These strategies vary based on the situation. By the end of Week Four, they hope to complete their forms and memorize their plays.

A/V has been efficiently working on Chairman’s Video as the deadline is rapidly approaching. For this week, they have been gathering video clips of members on the team to prepare for their project. Furthermore, they have been taking pictures of the team so that Business can use them on the Build Season Parent Newsletters. Members have been learning vital photography, photo-editing, and video-editing skills that allows them to improve their artistic abilities. Our team picture was taken this week as well, and members are editing the team picture in order to use it for the school’s Yearbook.

As Week Four comes to a close, members seek to maintain their current progress, preparing  for competitions and the completion of the robot. On the logistics side, members are finalizing  their award essays and videos to enter into competition for the Chairman’s Award. Students are enthusiastic about what is next to come. On the robot side, pressure increases as the Build season comes to a close. Nevertheless, they have continued to keep up the good work and their morale. For the team, this week was the opportunity to learn from their mistakes and allow for them to continue their success and progress into Week Five.