In the third cougar class, the students focused on critical thinking.  First, the team was introduced with the metaphor of a body to illustrate a robot.  The controls were the brain; the blood was the electrical system, and the skeleton was the frame.  By comparing a robot to a body, members who may not be familiar with a robot were able to further comprehend the robot and its assortment of parts. 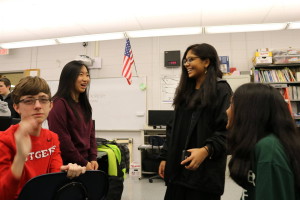 After the presentation, the team was given a challenge to build a contraption that would keep a ball running along it for as long as possible.  These machines were essentially a track for the ball to run along without touching the ground.  Teams of students, led by a Robotics sub-team captain, had to think critically about the best possible design for their machine, while considering the materials (paper, hot glue guns, straws, and wood) given.  Through teamwork and discussion, each group began to plan out an idea. While some groups suggested diagonal ramps that would allow the marble to fall off slowly, others decided on a design similar to parabola-shaped skateboard ramps.

In the end, the winning team had a marble that stayed on their contraption for approximately 15 seconds, while the second place team had a marble that stayed on for 11 seconds. Some teams struggled with getting their marble to fall off the contraption. In the end, the idea that worked the best was a design that had ramps which allowed the marble to roll off. Overall, working in a small group setting forced teams of students to focus on collaboration and communication in order to brainstorm innovative ideas while facing a challenging task.