The second Cougar Class focused on the design of the robot. It started off with Michael Leicht giving a presentation, talking about the factors that have to be considered when designing a robot. This included being able to identify the different forces acting on an object, the motion of the robot and starting with a strong base. 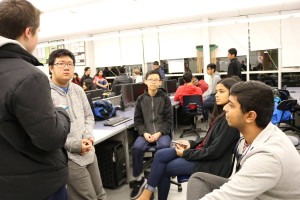 After the presentation, team members were split into 6 teams and presented with the challenge of building a car/rocket that would travel the most distance when propelled by air. The goal was to be able to build a vehicle that could travel the farthest. The teams were first given time to brainstorm and come up with a material list. The teams were only allowed a maximum of 5 materials. The point of this challenge was for teams to apply the knowledge from the presentation to their vehicles. The team who was able to get their vehicle propelled the farthest started with a strong drive base, which is the part that provides motion to the robot. In addition, the team took into account the different forces acting on the car/rocket and was able to minimize the forces acting against the vehicle when it was propelled.

At the end, the mentors recapped how the design process of the robot is not as complicated as it might seem if the robot is separated into different components.