The screech of the drill press driving through metal becomes the melody to the whirs of the handsaw, and the clattering of keyboards accentuating the bass line of productive discussion. As week one of the build season comes to a close, each sub-team has been working diligently to make extensive progress on this year’s robot. These meetings allow all of the sub-teams to come together and work as a whole.

To officially announce the start of build season, F.I.R.S.T., Team 1403 Cougar Robotics hosted a Kickoff event at Montgomery High School on Saturday, January 9.  Thirty-six teams assembled at the high school to learn about this year’s competition: Stronghold.  In Stronghold, F.I.R.S.T. teams are taken back in time to a medieval kingdom composed of towers and walls. On the “battle field,” two Alliances of three robots each are on a “Quest” to breach their opponents’ fortifications, weaken their tower with boulders, and capture the opposing tower. Robots score points by breaching opponent’s defenses and scoring boulders through goals in the opposing tower. During the final twenty seconds of the Quest, robots may surround and scale the opposing tower to capture it, thus potentially earning their team additional points.

Each year, the Design team has the biggest challenge because its members are responsible for designing possible outlines for the robot. To do so, they use a program known as Autodesk Inventor. Fourth-year member and Design team captain Arjun K. explained his goals for this year’s build season, stating, “I need to kick Design team into high gear. We need to get parts into the Inventor so we can start constructing the robot manual. A big goal for us is to be completely done well before the season ends, because last year we had to come in on super crunch time towards the end of the week. We have to keep them working throughout build season, and at a good rate. This week’s plan is to have a really heavy focus on getting everything modeled and in CAAD.”   The Design team has been working on recreating the field in CAAD so that prototypes can be properly tested. 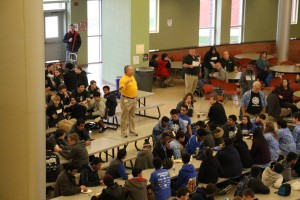 Meanwhile, the Mechanical and Electrical teams have been hard at work building and testing various prototypes that are vital for the final design. While these two teams are heavily responsible for the physical creation of the robot, each still belongs to its own niche: the Mechanical team focuses more on the structural components of the robot, while the Electrical team works on the wiring components.

Mechanical Team captain Faraz K. has a clear direction of what he hopes to accomplish in the upcoming weeks. “We’re focusing on creating prototypes,” he explained. “We went through two prototypes and they didn’t work. Now, we are making adjustments and finding what we can improve on.”

Not too far from where the Mechanical Team is hard at work, Electrical team captain Abhinav G. took a moment to give us some insight on what his team was doing to aid in the development of the prototypes and meet the deadlines. “We’ve been working to help Programming,” he said. “They’re working on a motion mapping idea that can use sensors to tell where we are on the field. We need to finish wiring prototypes. Mapping out the circuit board is really important. Towards the end of the week, we will work on where to put things on the circuit board.”

However, the logistics teams have also been busy supplementing the progress of the robot. Over the past few meetings, the Strategy team has been working on updating their scouting process to fit the new game. Their main tasks include writing down all the fields for the match and pits and preparing for the memento base.

At the same time that the Communications team was brushing up on the team website, the Business team has been hard at work with multiple assignments at once. Business team captain Brenda L. quantified the team’s vast amount of assignments, which included working on parent newsletters, completing Chairman’s and Woodie Flower’s essays, and organizing pre-season team events sheets. However, she is confident in the team, praising their hard work and punctuality. The business team’s strategy is to split the team into three groups, the writers, editors, and publishers, in order to maximize efficiency.

The Audio/Visual team captain Shaan P. helped us get a look into their progress. “[We are] finishing up [the] photo board and taking pictures of the mentors. [We are also] getting started on Chairman’s…” he said. The team will be starting another project, the Chairman’s video, as soon as they complete their photo board. 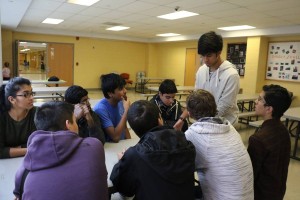 The first week of Build Season has definitely been hectic, but Team 1403 has been working efficiently and intensely to accomplish all of their goals and plans.  In just one week, all of the teams have collectively worked amongst each other and are already working hard to establish a pace for the following weeks of build season.