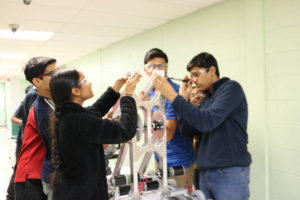 The Robot manager, Niva S, says that the Robot side will be having the robot up and running by the start of Week 5 to start testing and observe the flaws that it has. They expect to provide as much practice as possible to the drive team, and plan to test the robot in a competition environment to see the quality of performance. The Robot side will also be continuing to update resources for The Compass Alliance.

The Mechanical Subteam has been manufacturing and assembling parts of the robot this week. They have assembled the upright for the robot, where the arm is going to hinge on, and have also been able to assemble the arm. They plan to have the arm and upright mounted by Saturday, and they also plan to assemble the manipulator for the cargo and mount that as well. Mechanical has been working to meet the goal of a complete and running robot by this Saturday.

The Electrical subteam has been assisting the different subteams in addition to mounting the new limelight camera. They assisted Programming with the new control systems, and have been working with Mechanical to be able to wire the robot by this Saturday. They plan to get the electrical board finalized and approved as well as the electrical components finished so that Programming can get the robot running. 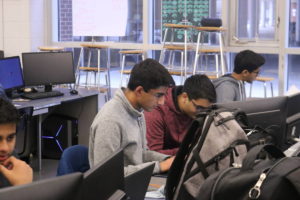 This week, the Programming subteam was able to get the Limelight camera, which improves vision processing to make the recognition of targets and movement easier. They have been working on integrating the data that we get from the camera to the robot. Since the robot should be done by this week, Programming plans to adapt vision and PID to the new robot and configure everything to the new robot.

Design has been continuing to manufacture parts with the CNC, machining various parts to be ready for assembly. They have also been working on engraving, so that the team name, number, and logo are visible on the robot. Design has finished engraving the team name on parts so that it can be seen on the final robot, and they are currently working on engraving our team logo onto it. They have also been making sure that all the plans and drawings are up to date and approved.

The Logistics Manager, Pranav S., has been working on finalizing the Chairman’s Essay, filling in the last statistics and details to the final product. The main goal of Logistics as Build season enters the final two weeks is to make sure that the essays are complete in time for the due date and as clear and comprehensive as possible. 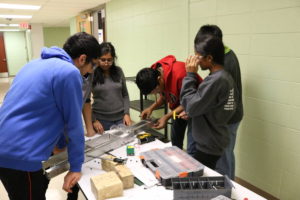 Business/Communication has been continuing with preparations for the Chairman’s, Woodie Flowers, and Donald Bowers essay, as well as creating weekly newsletters. They have started interviewing possible candidates for Donald Bowers, and they have also been updating our team website and improving its design, as well as working with the other Logistics subteams to make sure all the submission are ready.

The Outreach subteam has been setting up volunteer opportunities and upcoming events, such as Tech night to introduce children to new technology and encourage their interest in STEM and robotics. Outreach has been working with Business/Communications to provide summaries for the website so that all information on team volunteer events is updated and correct. The next event they are planning for is the Women in STEM event, to give girls and women in our community a better view in STEM.

The A/V subteam has met their goal of finishing the storyboard for the Chairman’s video, and have moved on to start work on the mentor photos. They have also been documenting the team’s progress by continuing to take pictures and record videos every week and at all events that our team attends and volunteers at. A/V has been working with the other Logistics subteams as well to finish the Chairman’s essay, video, and presentation. 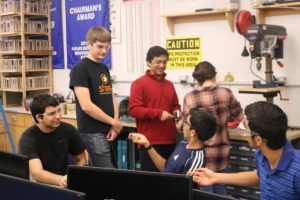 This week, Strategy was able to link their computer network with the help of Mr. Leicht and the school computer technicians. This will be able to efficiently analyze the team’s data during competition so that we are able to perform as well as possible. Strategy hopes to start practicing scouting using this network so that we can make the best alliance decisions. Strategy has been preparing for the end of build season in two weeks so that we are able to have a successful experience at competition.