We have now reached the end of the third week of build season, and Team 1403 has made significant progress. The robot is almost complete, and it is expected that the team will have a fully functioning robot by the end of Week 4. Members of all the subteams have been working hard to contribute to the success of the team. 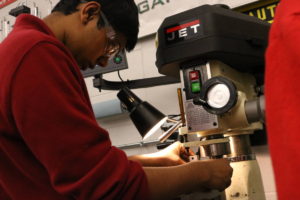 This week, subteams on robot side have all been working together on various components of the robot. Despite difficulties during the week, the team managed to create many functional parts for the robot, and they are coming very close to the completion of the robot. The Robot Manager, Niva S., is very proud of the progress that robot side made this week, and she wants them to continue their hard work during week 4.

Mechanical has been manufacturing parts from design and the CNC machine so that we will have all the parts we need for the assembly of the arm. They have been manufacturing these parts so that by the end of this week the arm and upright will be ready to go for testing by Vineet.

Electrical team assisted other subteams with the robot. They worked with the mechanical subteam by assembling and improving the robot, and they also worked with the design subteam to improve the electrical board. They worked on fixing the Vex bots for the Invention Convention on Saturday, and during the convention they ran the Vex bot station. At the station, young children had the opportunity to drive one of 3 small robots, and they were introduced to concepts of STEM. 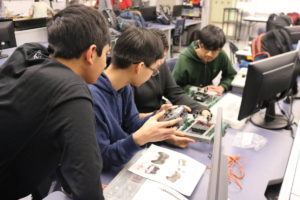 Programming subteam continued working on the pixy, which is a camera located on the robot. They began setting up another camera, called the limelight camera, and they practiced using it. It is likely that they will use the limelight instead of the pixy during the actual competitions.  Also, the programming subteam worked on creating new codes for the robot’s movement, and they tested movement of the vision system using simulated values.

Design team has been working hard all week on drawings for parts for mechanical to manufacture, and they mainly focused on drawings related to the upright and telescoping arm.They used computers to animate and design the intake assembly, autodesk inventor, total robot assembly, drive train, and electrical board. In addition, the design team 3D printed parts for mech updated documentation.

Logistics side has been continuing their work on the Chairman’s essay, presentation, and video, as well as organizing the volunteer events for our team. Logistics has been running a lot of work for the Science and Invention convention this week as well, with Outreach setting up the event and A/V documenting it.

The Science and Invention Convention took place on Saturday, January 26, and Outreach worked hard to make sure that the team was prepared for it. Outreach has spent this past week setting up the event to run smoothly, working with Mechanical to have small running robots available at the event. 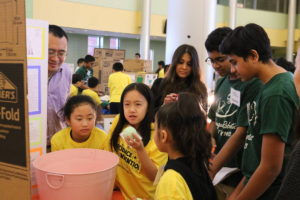 They have also finalized the design for the backdrop. Outreach also set up the evaluator volunteering event for the team, where 1403 members were able to work with the children at the Convention to judge the inventions present at the fair.

The A/V subteam has been working on finalizing the storyboard for the Chairman’s video, and they also documented and presented at the Science and Invention Convention.  The goal for A/V is to be able to finish the storyboard as soon as possible to be able to start putting the final video together. This past week, A/V has been keeping up the work by recording our team’s progress in photos and video.

Business/Communications is continuing to make changes and improvements to our website so that it is as organized and user-friendly as possible. They have also been working on the several essays that need to be written including the Woodie Flowers and Donald Bowers awards submissions. Business/Communications has also made significant progress with the Chairman’s essay, as they have been working on switching the Chairman’s outline to a rough draft.

Strategy has been researching the other teams in our area this week, as well as familiarizing the newer members with past competitions and alliances. They have also been talking to Design to have a more accurate picture of the types of robots that would be best compatible with our current design for potential alliances. Strategy has been focused on optimizing our competition performance and making sure that the best decisions are made in that regard. 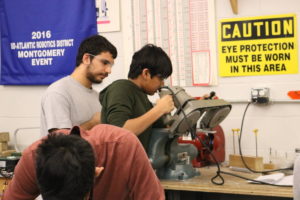 Week 3 showed the team that they must persevere through difficult times in order to become successful in their eventual goals. As we reach the middle of this year’s build season, we can see that Team 1403 shows potential for the upcoming competition season.