On January 6th in 2018, after months of hard work during preseason, thirty-six teams gathered in Skillman, New Jersey at Montgomery High School for the 12th annual FIRST Kickoff. The students anxiously waited for the reveal of the new Robotics challenge, streamed live from New Hampshire.

Prior to the official broadcast being streamed, the students were able to different workshops specializing in various aspects of robotics: Pneumatics, Gearboxes & Transmissions, Inventor, Sensors, and Women in STEM. Warren V., a Team 1403 alumni and engineer 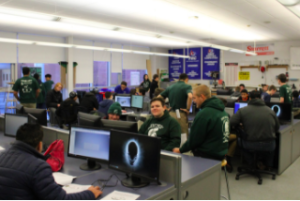 ing student at NJIT, led a discussion on Pneumatics. Programming mentor, Mr. Jeff Bernadis, presented sensors. Mentor Mr. Michael Leicht led a discussion on gearboxes and transmissions. And the Team 1403 Design team hosted the inventor workshop. These workshops gave students the ability to display their skills and knowledge and gain hands-on experience, while others provided useful information that could be utilized during the building stages of the season. An example, Inventor taught students how to use the application that Team 1403 uses to design the robot, while Gearboxes explored engineering knowledge about topics like night vision and inertial sensors.

This year, Team 1403 held its second Women in STEM event, led by Outreach Captain Rithika A, and two guest speakers, Ms. Fiona Borland, the Director of Instructional Technology, and Shruti Das, a Team 1403 alum that currently attends the University of Maryland as a Computer Engineering major. The goal of the event was to educate other students and parents about the obstacles that girls face, to show female students that they are not alone. Many parents attended the event and shared their experiences in the workforce and gave astounding advice for the girls on the robotics teams. This particular event brought together girls of different ages and backgrounds and demonstrated that everyone starts at a different place, but with determination and perseverance, they can succeed. 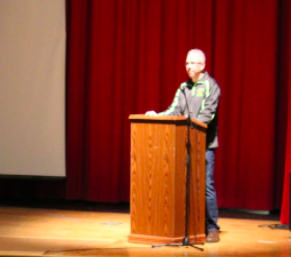 ve an inspirational speech to the students, outlining his vision for the future of robotics. Later Ms. Fiona Borland also shared her passion for the work that Team 1403 does and the bright future it has down the road. She introduced our Picatinny sponsor Shahram Dabiri, who gave a motivational speech about the innovative spirit of the Robotics team members. Without their enthusiasm and contributions, Team 1403 FRC Robotics would not be the same as it is.

This year’s challenge, named “FIRST Power Up”, was themed after retro video games; thus, the Kickoff started with an animated video designed to look like a video game, describing the various principles of FIRST. This video featured the founders of FIRST, Dean Kamen and Woodie Flowers, who talked about the concepts of Coopertition and Gracious Professionalism.

The challenge itself centers around the manipulation of “power cubes”, cube-shaped milk crates that are covered in 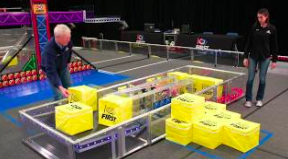 plastic. The six robots (three per alliance) have 15 seconds to moves autonomously (without the drivers touching the controls), followed by 135 seconds during which they are operated by alliance members. The object of the game is to score points by moving the power cubes onto field elements. Points are scored based on the amount of time that the switch or scale is tipped to the scorers’ side. Points can also be scored by taking the power cubes out of the playing area and storing them in a “vault”, where they can be redeemed for temporary advantages. Near the end of the game, the robots can “face the boss” by climbing up the scale, receiving a large sum of points for doing so.

The day after Kickoff, the team spent brainstorming and came up with potential robot designs and game strategies. Overall, Kickoff this year proved to be a massive success, setting the stage for another great season. Teams can look forward to an interesting, exciting competition this year and take the experience and knowledge they gained at Kickoff and utilize it in the playing field.