Mrs. Leicht started the 4th Cougar Class by giving a presentation about mannerisms and etiquette. She educated students on skills such as placing utensils on the table or giving a proper handshake.

After the presentation, the students were individually given a Lost at Sea ranking chart, on which the students were given the challenge of arranging 15 items on the list in order of importance if they were lost at sea. The list included a sextant, shaving mirror, mosquito netting, container of water, case of army rations, maps of the Atlantic Ocean, floating seat cushion, can of oil, radio, 20 square feet of opaque plastic sheeting, can of shark repellent, bottle of rum, nylon rope, chocolate bars, and a fishing kit & pole. After finishing the rankings based off of their previous knowledge and individual, the students worked in teams, led by the Robotics sub-captains to form a consensus through teamwork and discussion.

In the end, an elimination round took place. The teams’ rankings were compared to those made by the United States Coast Guard. If the teams’ rankings were incorrect, the team had one chance to stay in the round by switching their answers but on the condition that they could make any knot from an email sent out the week prior to everyone in the program. The surprise to most students was that most teams got most of their ranking wrong. In fact, while most teams chose water as their first choice whereas the first chosen by the Coast Guards was a shaving mirror, due to its ability to reflect light. Later it was found out that the winning team had two members from boy scouts who had done the activity prior.

This cougar class taught members how to listen to one another when working in a team environment. Students learned to be more prepared for cougar classes. The teams that had the most success had printed out the emailed informational packet on knots. 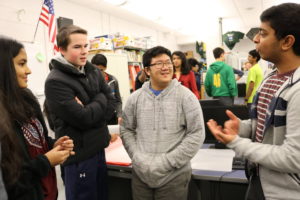