Team 1403’s first Cougar Class of the year began with a presentation by Michael Leicht in which he expounded on our team’s value, the importance of sub-teams within a team, and background information on our achievements. Concluding his presentation with a comparison of each sub-team’s role to a company (Business acting as marketing, Strategy acting as a company’s direction, and Mechanical acting as production), the mentors presented the members with the night’s challenge: The Tape Measure Ramp.

After team members were separated into ten different teams, they were given a session of brainstorming and the opportunity of choosing five items, amongst ten materials, to complete the challenge. The point of the activity was to strategize a way to make a ball roll, on its own, into a cup and the team that could roll the ball, with the greatest amount of distance, would win. With strategies both successful and unsuccessful, the teams with the most realistic goals performed the best. By using supports along the tape measures at intervals and using good perspective, teams were able to successfully roll the ball into the cup and even exceeded their own expectations in terms of distance. Most of the team’s loss was due to overestimating distance and setting unrealistic goals.

The class ended with the mentors explaining the concepts of the game and its relation to us as individuals. He explained the importance of being realistic, accepting your limited resources and thinking outside of the box to go beyond your expectations. 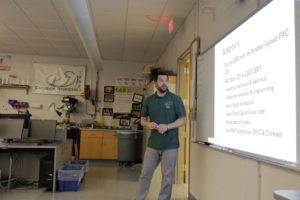