Team 1403 has been hosting an official FIRST Kickoff event since 2007, and we couldn’t be prouder. In January each year, FIRST teams from New Jersey, Pennsylvania and Delaware gather at Montgomery High School to learn about new technology, socialize, and have fun. This event marks the beginning of the competitive season, and the new challenge is revealed to the world by webcast.

Monty Madness, which started in 2006, is another event that not only brings together teams from different regions but also is attended by many members of our community. In the past few years the list of attendees has expanded to include over forty teams. Monty Madness is held in May each year. 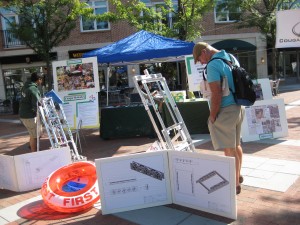 Our team makes robotics presentations at our township’s library, Mary Jacobs Library, during the winter holidays.

Team 1403 also extends its influence beyond its own communal borders to the nearest city, Princeton. We have held demonstrations at Palmer Square and the Somerville Street Fair. It has attracted a wide variety of people young and old to inquire about FIRST and our robotics team. We have also exhibited our robot at a Somerville Patriots game in Bridgewater, spreading the word of FIRST to those crazy baseball fans. 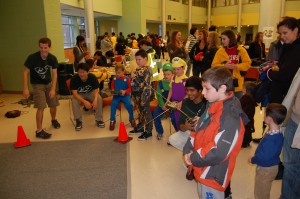 Our schools help to tie together our diverse community members through various activities including the Fall Festival. For six years, we set up VEX robot obstacles at the Fall Festival to allow young kids spark up their interest in robotics as well as FIRST. This community event is one of the biggest activities of our year, as we are educating and informing our community about FIRST and our team.

We introduce FIRST to the younger generations through our FIRST Lego League team at the middle school. We had mentored the team for two years, helping the middle school students build their interests in science and technology and lead them into a high school career. Our team also volunteers at the Summer Enrichment Robotics Program, where fifth through eight graders participate in one-week sessions about robotics, science and technology.

We have reached out to our community leaders in our town’s Rotary Club. This group of successful community members has influence over the events of the town as well as the many organizations scattered around Montgomery. A few members of our team gave a presentation to the members of the Board of Education introducing FIRST to these influential members of our school.

We particularly enjoy the cooperation at FIRST events and readily offer help to teams who need it. Veteran teams that we have helped include

We help other teams in order to quickly acquaint them with FIRST and all it has to offer. We also lend electronics and other key parts to other local off-season events in our area, such as

After experiencing FIRST on Team 1403, many of our alumni move on to pursue careers in science and technology. Our alumni have spread the word of FIRST by starting new FRC teams: 1739 Chicago Knights, 3138 Innovators Robotics, 3186 DECAbotz, 3929 Atomic Dragons, 4096 Ctrl-Z, and 4991 Horsepower. We have also begun to aid these teams by sending them basic parts and programming assistance.